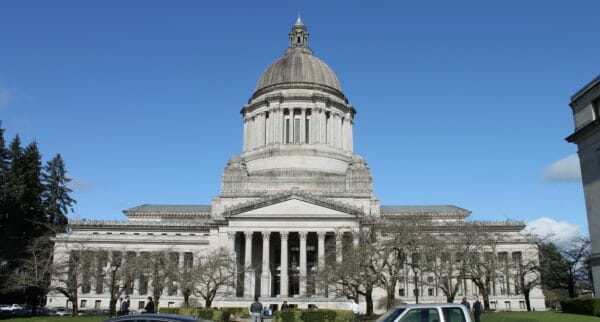 Washington State Capitol building, Olympia.U.S.A. –-(Ammoland.com)- 27 years ago, Washington state passed a bill requiring the Washington State Police to sell valuable firearms rather than destroying them. Provisions were made for the destruction of firearms which could not be legally owned. For political reasons, local law enforcement agencies were not included. In some of those jurisdictions, such as the Yakima Police Department and Vancouver Police department, all guns are destroyed for political reasons. A bill to allow the State Police to destroy legal guns passed the House in the Washington state legislature on 23 January 2020. Selling or not selling the guns has no effect on the availability of guns because the guns are sold through licensed dealers.  They are simply another gun in a dealer's stock.  Destroying guns that have ended up in police hands simply means the money goes to a gun manufacturer to produce another gun, instead of to the police. The Bill, HB1010, passed in the House 56 to 42, on a partisan vote. From columbian.com: The House passed the bill along party lines Jan. 23, with Democrats voting in favor and Republicans against. Its next stop is the Senate Rules Committee and then a floor vote. Rep. Sharon Wylie, D-Vancouver, cosponsored the bill. Wylie said it seems like an oversight that state patrol is unable to destroy firearms, and it makes sense to change the law to have consistency. The Washington State Patrol wants the bill to pass, and its intended changes are needed, communications director Chris Loftis said. “Current law allows other law enforcement agencies the option to destroy but is strict with WSP, stating that we must keep them for agency use or auction/trade with licensed dealers, who then will sell them to the public,” Loftis said in an email. About a dozen states have passed legislation requiring police to sell legal guns rather than destroy valuable assets. Opponents of police selling guns do not have a logical reason for the police to destroy guns rather than sell them. They acknowledge very few guns sold by police end up being used in a crime. The arguments to destroy the guns are all emotional. Some police say they would feel bad if they sold a gun and it were used in a crime. The most egregious use of a gun sold by police, in a widely distributed AP article, was by a prohibited possessor who purchased a pistol in a private sale, years after it was sold by police to a dealer. The prohibited possessor used it to commit suicide. The arguments are all about the legitimacy of gun ownership. If guns are legitimate to own, selling guns surplus to police use makes perfect sense. If you believe guns are bad, selling them is an immoral act. The point of destroying valuable guns is one of making a moral statement, of proclaiming to the world that guns are evil and should be destroyed. If you do not own guns and despise those people who do, this is a way of telling the world you have won a victory. It does not matter if the gun companies increase their profits through your actions. Destroying valuable guns is political theater, designed to teach people that guns are bad. Emotional political theater is seldom a good policy. About Dean Weingarten: