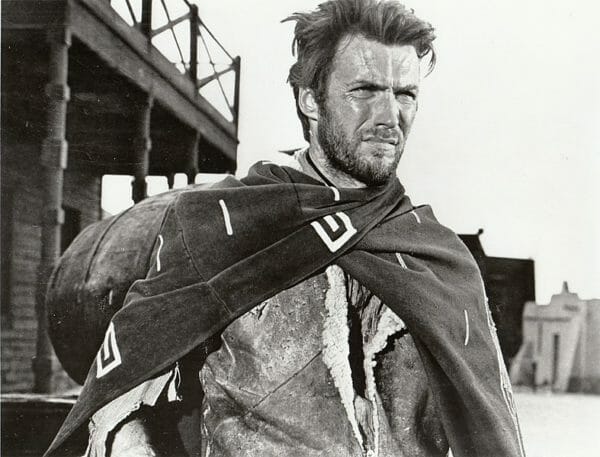 With his endorsement of Michael Bloomberg, professional pretender Clint Eastwood has effectively endorsed real-life fan disarmament edicts. (A Fistful of Dollars publicity photo/public domain)U.S.A. – -(Ammoland.com)- “A Hollywood Legend Talks Politics,” The Wall Street Journal reported in a Friday profile piece. “Actor-director Clint Eastwood, 89, weighs in on Bloomberg, Trump, #MeToo and the dispute over a reporter’s depiction in his latest film.” The Drudge Report spoiler headline told gun owners Eastwood’s “conservative” reputation, bolstered by talking to an empty chair as if it were Barack Obama at the 2012 Republican National Convention,  was not going to hold up here. He came right out and posted the spoiler headline: “Clint Eastwood for Bloomberg…” Talk about burying the lede. You had to read the last sentence in the paywalled WSJ article itself to find it. “The best thing we could do is just get Mike Bloomberg in there,” Eastwood declared. So the actor who went from a TV cowboy, to earn international fame as the iconic Man with No Name in spaghetti Westerns, with perhaps his most famous role being the .44 Magnum-wielding Dirty Harry, supports a rabid gun-grabbing zealot? That may not be his intent, but it may be, and regardless, that’s the effect this has. Irrespective of whatever other reasons Eastwood may have, he is supporting a billionaire who will add the weight of the U.S. government to disarm his countrymen, including Eastwood and his fans. He is, to put it bluntly, but accurately, giving aid and comfort to the enemy. Eastwood’s not the first Hollywood A-lister who made his name as an “action hero” by using guns onscreen. Two notable colleagues, also with undeserved “conservative” reputations whose affinity for gun-grabbing has somehow been overlooked by many gun owners, are Arnold Schwarzenegger and Sylvester Stallone. We knew Arnold was wrong for California gun owners before he was crowned by the Establishment to be governor. Those warnings were borne out after he was elected, first by his signing a law to ban .50 caliber rifles, then microstamping and lead ammo ban bills, and then a handgun ammo registration law. And inexcusably, rice bowl gun groups refused to admit the truth before he was elected–and some even after he had proven he was not our friend. As for Stallone, some of us have been warning gun owners about his call for the government to go door-to-door to confiscate guns ever since he made it back in 1998. I confess I find it discouraging that 22 years later, there are still gun owners excited about his movies and saying this is all news to them. It shows more than anything how insulated such reports are and the need for gun owners to share links and information because no one else will. And don’t get me started on every actor who has played James Bond. Starting with Sean Connery advocating for a total UK handgun ban to Daniel Craig who said “I hate handguns. Handguns are used to shoot people and as long as they are around, people will shoot each other,” they’ve all proven to be false fronts. “In a way, seeing famous celebrities prove themselves to be … enemies … is disappointing.” I noted in a GUNS Magazine column on anti-gun “movie stars”. “After all, the experience most of us have with entertainment luminaries is watching them pretending to be heroic, witty, compassionate, beautiful and wise. It’s easy to assign those traits to the actor behind the character, and forget we’re essentially watching a stage prop speaking lines and performing deeds at the direction of others who aren’t as photogenic. Once they’re off-script, we’re basically dealing with people who live in a bubble of celebrity privilege…” Not many of us are immune. Eastwood is a disappointment precisely because he appeared to be different in real life from his industry peers. That’s the power of professionally manipulated imagery conjuring up “the stuff that dreams are made of.” That’s what makes Michael Bloomberg — with the resources to hire the most skillful illusion-casters money can buy and then flood the mass media with his narrative — so dangerous. And that’s what makes Clint Eastwood’s backing the control freak tyrant so “unforgiven.” I don’t know how many movies he’s got left in him, but if he wants any more gun owner money, he ought to look back on his endorsement of their biggest nemesis and then ask himself if he feels lucky. About David Codrea: