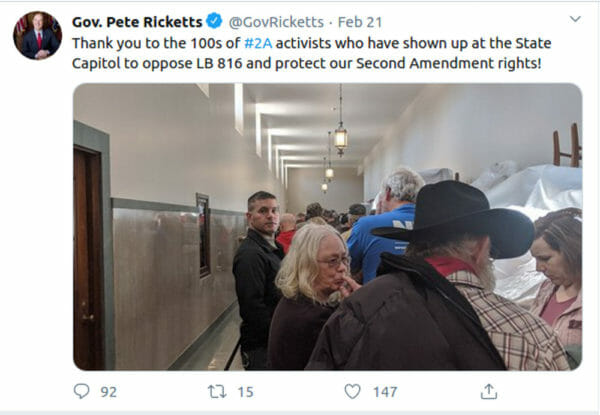 From twitter, cropped and scaled by Dean WeingartenU.S.A. –-(Ammoland.com)- Governor Pete Ricketts has come out strongly in support of people exercising their First and Second Amendment rights at the Nebraska State Capitol. President Trump's use of social media outlets such as Twitter is serving as a template for other politicians to go directly to the people and around the coverage of the legacy media. On 21 February, at the Nebraska Capitol, hundreds of Second Amendment supporters showed up to the Judiciary Committee hearing to oppose further restrictions of the right to keep and bear arms,  particularly LB 816.
https://www.youtube.com/embed/0uQ-bQ4NZiA
The Second Amendment supporters exercised their intertwined First and Second Amendment rights. Those rights are reinforced with protections in the Nebraska Constitution. LB 816 would place severe restrictions on the sale of most semi-automatic rifles and shotguns. Governor Pete Ricketts, (R) Nebraska, refused to follow the Democrat script that proclaimed the exercise of rights as a problem. He straightforwardly supported those who exercised their rights. From ketv.com: The men with guns do have the support of Gov. Pete Ricketts. “I support our Second Amendment rights and I support our folks who are going to take advantage of that with our right to open carry,” he said. “That's what we have in the state of Nebraska and this is the people's house.” This is noteworthy. Most politicians claim to support the right to keep and bear arms, with caveats and cutouts. The word “but” is prominently displayed at the end of their sentences. Governor Rickets did not qualify his support.  The number of governors who support open carry in their capitols is small. Governor Ricketts is displaying political courage. He risks castigation by the media. He is refusing to be politically correct. Just a few days before, on 18 February, Governor Ricketts issued this statement.  From governor.net: The United States Constitution guarantees the right to keep and bear arms. The first sentence of Article I of the Nebraska Constitution reasserts this right: “The right to keep and bear arms for security or defense of self, family, home, and others, and for lawful common defense, hunting, recreational use, and all other lawful purposes…shall not be denied or infringed by the state or any subdivision thereof.” Over the past few years, my team has worked to safeguard your rights. For example, we have created an online process to renew, update, or replace a handgun permit, saving gun owners across the state valuable time. In 2018, I signed LB 902, a bill brought by Sen. Bruce Bostelman of Brainard, which protects the identities of gun owners with concealed carry permits. And when the National Rifle Association (NRA) was under attack, we invited them to Nebraska because the people of our state understand the importance of the Second Amendment. There is more to the statement. Governor Ricketts comes out in favor of protecting the right to keep and bear arms to defend property from pests and predators, to hunt, and to use them for recreation, as well as for self-defense. All of those actions are protected under the Second Amendment and the Nebraska Constitution. Most politicians have been unwilling to point out the obvious. Constitutionally protected rights can and should be exercised; peaceful practitioners should be praised for their upholding of the Constitutional order. This is how the rule of law is promulgated and passed from one generation to the next. Governor Ricketts deserves kudos for his straightforward support and defense of Constitutional rights, in the face of heavy disapproval by those who do not believe in limits on government power. Those who do not approve seem to include most of the legacy media. So many Second Amendment supporters showed up at the hearing the vast majority were unable to get into the hearing room. The committee cut the allotted time to speak from three minutes to a minute and a half per person. About 50 people spoke against the bill, while 5 spoke for it. Hundreds more waited in the halls outside. The bill was touted in the media as an anti-suicide bill. Second Amendment supporters have been learning it is important to show up and make their voices heard. The efforts of many years of organizing and building communication networks are paying off. About Dean Weingarten: