Friend of Dayton Killer Sentenced To 32-months In Federal Prison

Friend of Dayton Killer Sentenced To 32-months In Federal Prison 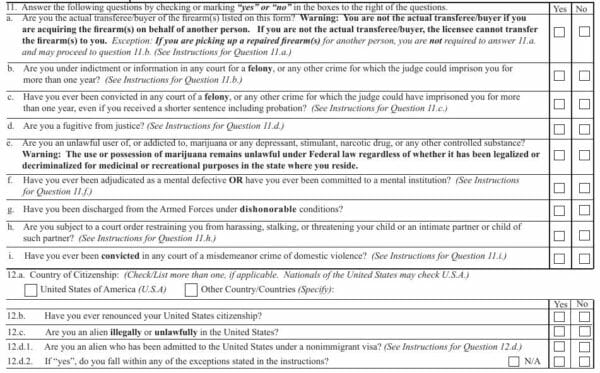 4473 prohibited personsDayton, OH –-(Ammoland.com)- A judge has sentenced the man who ordered gun parts and body armor to the Dayton killer to 32 months in federal prison on federal gun charges. Last November, Ethan Kollie, a friend of the Dayton mass shooter, pleaded guilty in federal court to two felony counts. The first charge was possessing a firearm while under the influence and addiction of a controlled substance. The second charge was lying on the federal 4473 form. Police initially interviewed Kollie in connection to the mass shooting in Dayton by a far left-wing Satanist. Kollie bought the shooter body armor and gun parts, including an Anderson Manufacturing AM-15 upper receiver and a 100-round drum magazine. Police determined that Kollie was not involved in the shooting and did not know the killer's plan. The killer had Kollie order parts for him to avoid his parents from finding out that he owned guns. Kollie also helped the murderer build his firearm and went to the shooting range with him to practice marksmanship. During the interview, Kollie admitted to owning several guns, including a Century Arms Micro Draco pistol, a 9mm handgun, and an AR-15. Kollie explained to the investigators that he liked guns and would buy firearm parts for various builds. Police asked him if he would wave his rights and consent to a search of his property. He agreed to the police request. During the search, police found marijuana, psychedelic mushrooms, psychedelic mushrooms grow equipment, a bong, and other drug paraphernalia. They also alleged that Kollie also used other hard drugs such as LSD. Kollie admitted that he smoked marijuana daily since he was 14 years old. Police initially took Kollie into custody on drugs and weapon charges. None of the filed charges were related to the Dayton mass killing. Federal authorities filed charges against the admitted habitual drug user for possessing firearms under the influence and addition of a control substance. Kollie could have faced up to ten years in jail for the charge. His attorney asked for leniency because of Kollie's clean record except for one misdemeanor. Prosecutors also charged Kollie with lying on the federal 4473 form. He marked “no” to the question, “Are you an unlawful user of, or addicted to, marijuana or any depressant, stimulant, narcotic drug, or any other controlled substance?” Making a false statement regarding firearms on a federal form has a maximum sentence of five years. Kollie was on house arrest since pleading guilty to the two charges in November. He has been clean and sober since his arrest and has passed all drug tests. He says he has cut ties to the group of people that were bad influences on his life. Kollie's attorney asked for mercy for his client, stating that his client has learned his lesson. He asked the courts to sentence Kollie to supervised release. His attorney said that prosecutors ignored that Kollie was fully cooperating with their investigation. Federal prosecutors asked the court to sentence Kollie to 34 to 41 months in federal prison. Prosecutors said: “When society needed a responsible, clear-thinking person in the room, it got a regular drug user, with resulting impaired judgment.” The judge eventually settled on 32-months in prison, followed by a three-year probation period. The court also stripped Kollie of his right to buy or own firearms after he pays his debt to society. Kollie has not faced charges for the drugs and paraphernalia. About John Crump