https://www.youtube.com/embed/oKjBBM4OTPo
U.S.A. –-(Ammoland.com)- Despite what your girlfriend or wife may have told you, sometimes shorter is better… and the Desert Tech SRS A2 has to be the shortest, most compact, fully capable, long range rifle ever devised. This is actually a bullpup rifle, and what that means, is the rifle can be shortened by placing components like the firing mechanism and magazine in the stock, behind the trigger, allowing the barrel to be moved rearward. This allows you to retain full-size barrel length and the advantages such as greater muzzle velocity and potential accuracy, in a smaller, more compact package.  Essentially bull pups use all the space in the stock, that is normally wasted in a traditional rifle. This does present some new challenges and a new system of arms, but I actually feel that the whole bull pup idea actually translates better in a long range bolt action rifle than it does in a semi-auto rifle. The reason I say that is, you get more returns from the basic premise of the platform. When you convert a traditional semi-auto rifle to a bullpup, the entire rifle length goes down by a few inches. 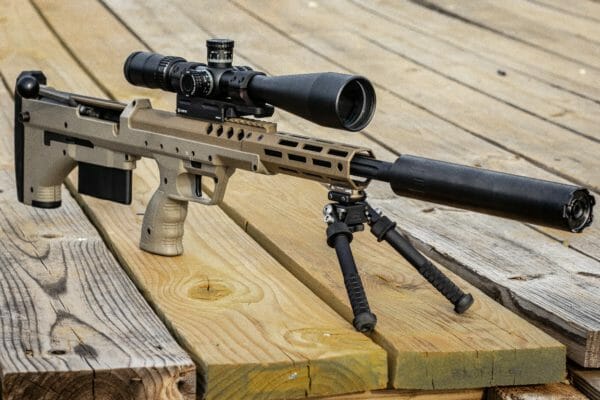 Desert Tech SRS A2For instance, if you take a normal 16 inch AR like this BCM with the stock collapsed it measures thirty-two and a half inches. Compared to a bull pup semi-auto like the IWI X95 at twenty-seven and a half inches, that gives you a loss of about 5 inches going with the bull pup platform. Now, to be fair, you’d probably want to extend the stock on the BCM a couple of inches to make it comfortable to shoot. That is great, but nothing like a loss in length in the precision rifle category. This is my Bergara LRP Elite in 6.5 Creedmoor, and I love this rifle, but it does measure in at a monstrous forty-seven and a half inches of overall length. Compared to the Desert Tech SRS A2 at a mere twenty-nine inches, that’s a loss in over all length of eighteen and a half inches! 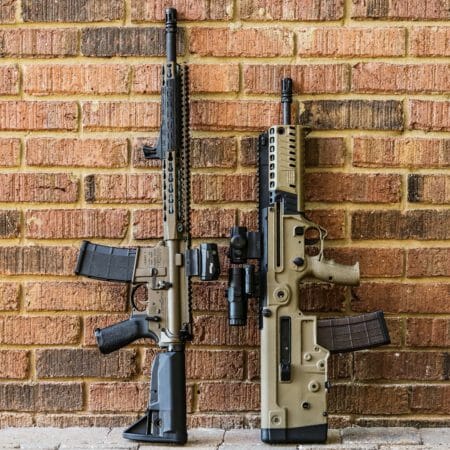 A normal 16 inch AR and a normal bull pup 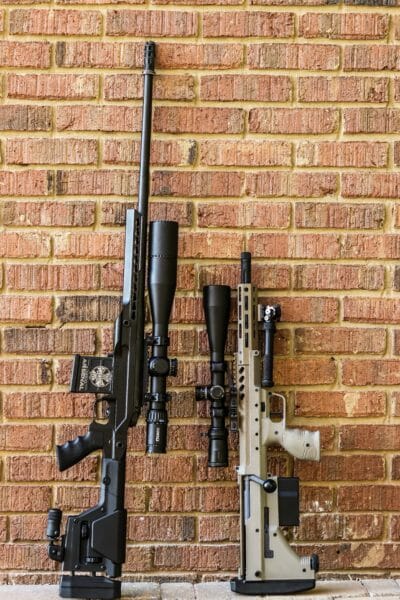 A more traditional 6.5 Creedmoor rifle and the Desert Tech SRS A2With an overall length of twenty-nine inches, the Desert Tech SRS A2 is insanely small for a precision rifle. It’s actually closer in overall length to a sub-gun or SBR than it is anything else. It also weighs in at a  mere 8.3 pounds, making it plenty light enough to be very agile. Bull pup ergonomics can be odd, however, I feel like the ergonomics transfer better on a bolt action rifle. Mainly, because well, you’re still working a bolt, and you’re not trying to perform quick reloads as often as you would be with a semi-auto rifle. 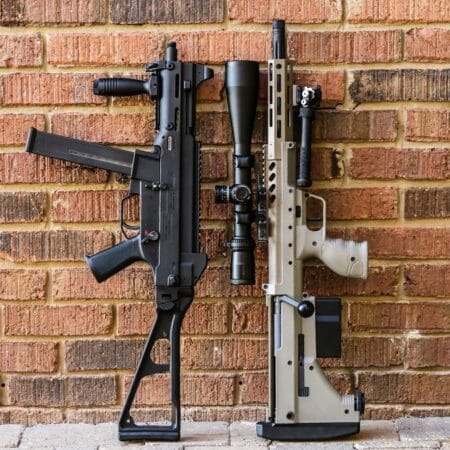 A sub gun, and the Desert Tech SRS A2The Desert Tech SRS A2 Covert really capitalizes on its short stature by going with a shorter than traditional 6.5 Creedmoor barrel at 18 inches. I actually wish that more companies would at least offer shorter barrels for their 6.5 Creed guns. Because this rifle, with this barrel length, still got shots effectively on at 1000 yards and was razor accurate at 700 yards. I just feel for most shooters, that is more than adequate, and we don’t all necessarily need 24 inch Creedmoor barrels. Let’s take a look at ergonomics for a second because sometimes bull pups can take a lot of getting used to. However, I don’t think you’ll really find that with the Desert Tech SRS. Let me just say, that I think the overall ergonomics of the SRS are very well thought out and exceptional. The length of pull can be adjusted with spacers in the stock, and the cheek riser can also be customized to the shooter. The grip is extremely comfortable and works great whether you want to use it as a traditional pistol grip or take a more precision style grip with your thumb on the same side as the rest of your hand. Bull pup triggers kind of have a reputation for being well, let’s just say lousy. Not the case with the Desert Tech SRS A2, this trigger is outstanding. The shoe has a very nice flat face on it, allowing you to get a good consistent pull. Mine is very crisp, and pulling at just under 2 pounds. The trigger is also adjustable and can be adjusted even lower if you so desire. I just kept mine just the way it shipped and it is working phenomenally well for me. In my opinion, the Monopod is a must have and an awesome addition to the SRS. It is completely housed in the stock and when collapsed is virtually unnoticed. Pull on the base and it will quickly deploy, and then can be twisted to fine tune your elevation. The first week we had the rifle, we actually didn’t have the monopod, and I found using the monopod much more comfortable and preferable than sand bagging this particular rifle. 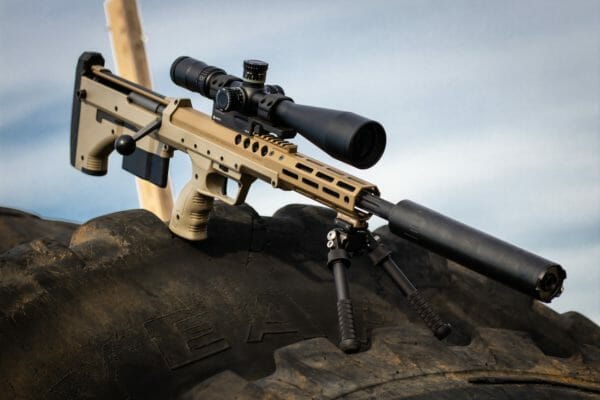 Desert Tech SRS A2Another really cool thing to note about this rifle system is that it can easily change calibers at the user level in minutes. You can swap barrels and switch to a number of popular calibers, all the way up to 338 Lapua Magnum. That does potentially give the platform more versatility, especially if you wanted to try another caliber without buying an entirely new rifle. 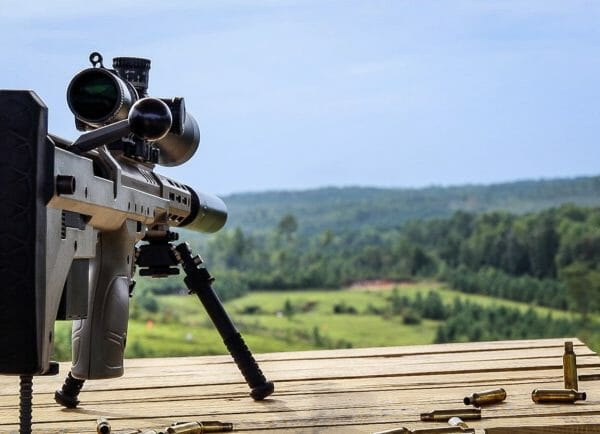 Desert Tech SRS A2The Desert Tech SRS A2 Covert is an absolutely outstanding rifle, and I love the fact that it is a fully capable long range precision rifle in an amazingly small and compact package. It’s so nice being able to get your long range gun in a bag you would normally put an AR in, rather than some massive drag bag. I think for more practical use, I could really see this rifle shining in law enforcement use. Because of its compact size, it would be very easy to maneuver into any spot, set up quickly, and be ready to take a very accurate shot. Now, unfortunately, like most things that are really nice, it is on the expensive side. But if your budget allows it, I would highly recommend the Desert Tech SRS A2 covert; I assure you it won’t disappoint. It will deliver everything a full-size precision rifle will, in a much smaller, more compact package. About Alabama Arsenal