Gun Owners Cause Peace – the Amazing Experiment in Richmond, Virginia

Gun Owners Cause Peace – the Amazing Experiment in Richmond, Virginia Despite a massive Second Amendment rally in Richmond, Virginia in January, Democrats are pushing gun control and apparently punishing sheriffs' deputies by withholding pay raises because lawmen spoke out against new gun control laws. Photo by John CrumpU.S.A. –-(Ammoland.com)- The mainstream media tells us that guns cause crime. The media shows us night after night that guns are bad. We see it in their “news” and in their Hollywood dramas. We recently conducted another massive public experiment and the results contradict the media’s story about guns. We put tens of thousands of armed men and women on the street in one small area. The rate of crime dropped precipitously when these armed civilians were there. Guns brought peace. Let me show you what happened. Twenty-five-to-fifty thousand people came to the Virginia Capital on one morning to lobby the legislature. Once they filled the capital grounds, they overflowed into the streets in every direction. A few thousand people deliberately disarmed to enter the capitol building. I can’t prove that everyone else was armed, but the vast majority of them were since this was a second-amendment protest. Judging from the pictures I’ve seen and the people I’ve talked to, for each person who was not armed at the rally, there was another person who carried multiple firearms. Call it one gun per person in round numbers. I couldn’t find reports of violent crime in the area of the protests when I searched the news and police records. The protesters even brought trash bags and left the city streets cleaner than they’d found them. The single reported arrest I could find was of a counter-protester. 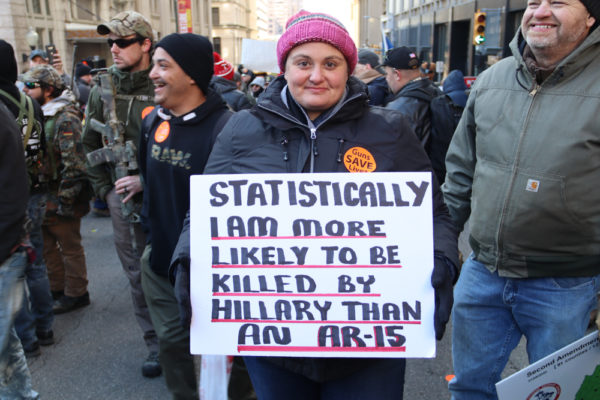 Thousands of more gun owners crowded the streets surrounding the Capitol armed with everything from a small Ruger LCP to a BarrettVideo from ground level- https://t.co/NXZPwDxpPG This peaceful gathering isn’t a surprise once you study the record of legally armed civilians in the US. We’ve seen this phenomenon before and I’ve seen it with my own eyes. I routinely stand in a room with twenty-to-thirty thousand armed individuals. I’ve done that over a dozen times and the results are uniformly boring. I’ve never seen violence at those sites. I’ll go a step further and say that people are polite and there is very little conflict of any kind. We’ve searched police records and the rate of crime drops in every city when that many gun owners gather together. A public experiment on that scale is a sociologist’s dream come true. It is remarkable when we gather that many gun owners together, and we conduct that experiment for free year after year. Honest gun-owners bring peace rather than crime and conflict. You could argue that we conduct a similar experiment every day when these honest gun owners return home and go about their lives.. armed. We are there day after day, but concealed is concealed, and you never see us. That leaves an obvious question unanswered. Ask yourself why the media continues to sell the lie that guns and legally armed citizens cause crime. About Rob Morse

The original article with sources is here. Rob Morse writes about gun rights at Ammoland, at Clash Daily, and on his SlowFacts blog. He hosts the Self Defense Gun Stories Podcast and co-hosts the Polite Society Podcast. Rob is an NRA pistol instructor and combat handgun competitor.