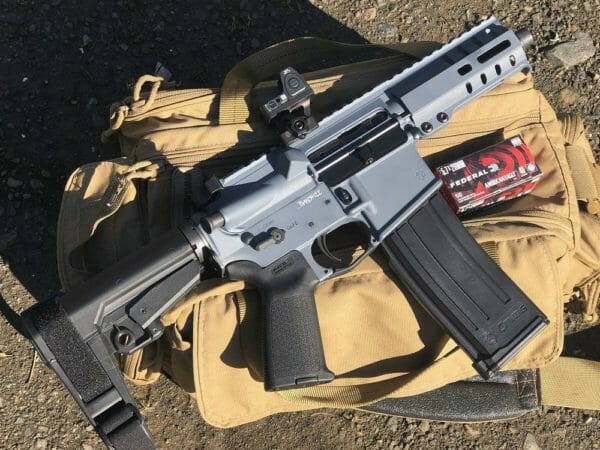 CMMG Banshee 5.7×28 ARU.S.A. –-(Ammoland.com)- Recently the PR group that handles CMMG products, Chevalier Advertising, invited a small group of PNW-based reviewers out to a remote rock pit in Oregon for a lengthy range day.  Among the highlights of the day was the new 5.7x28mm AR, found in CMMG's Banshee line-up.  This is something I noted during in my SHOT Show notes, though I wasn't expecting to be shooting one so soon! Made famous in FN's P90, the 5.7 round can be found in factory pistol or SBR offerings from CMMG.  Additionally, I think the most tempting offer to many buyers, will be the 5.7 conversion package bundles.  The MK57 upper arrives in three different barrel lengths, 5″, 8″ and 16″.  Though the 16″ upper falls under the Resolute (rifle) line, we'll stick with the Banshee name throughout the article. 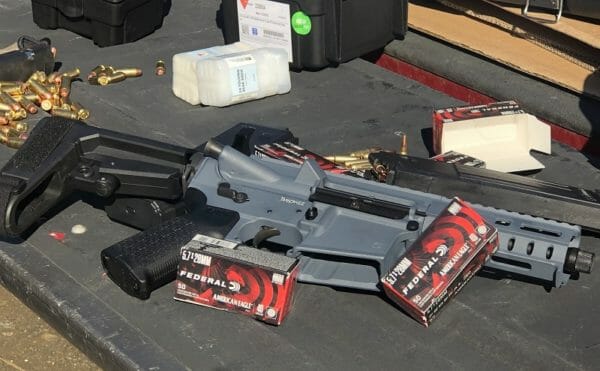 CMMG Banshee 5.7×28 ARTECH SPECS:  (Options depend on bundle package) As you can tell from the photos, the CMMG Banshee in 5.7 made available to us was of the 5″ barreled, pistol variety, wearing a Trijicon RMR.  Federal Ammunition was kind enough to supply us with a big pile of 40 gr, brass-cased FMJ rounds. While our day and range equipment weren't conducive to benchrest-style accuracy testing, we were able to get some general impressions regarding that, reliability and recoil. 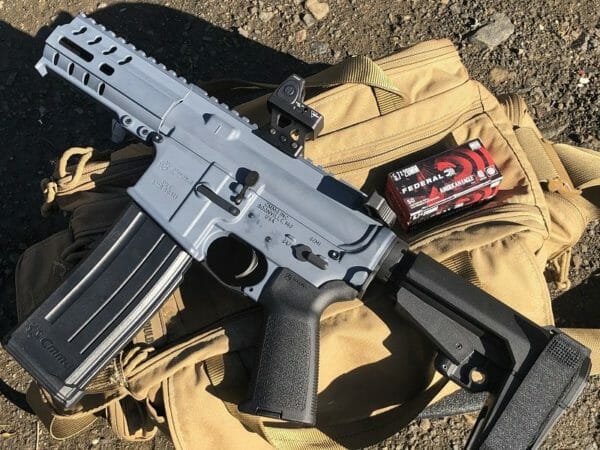 CMMG Banshee 5.7×28 ARLet's start with recoil, as it will be the shortest section.  There isn't any.  The end.  Seriously though, this thing has less thunder AND less lightning than a comparable 5.56 AR.  The recoil is laughable, and it quickly became a game to see who could dump a full 40 round mag the fastest while staying on target (sorry about your steel GB!).  Not much muzzle blast to talk about either, with the Banshee sounding closer to a .22 Magnum than a 5.56 going off.
https://www.youtube.com/embed/9pVs-UwPo1U
As for accuracy, the Banshee performed much like I'd expect any good AR in 5.56 to perform.  Once the RMR was bolted on, we started drilling the steel at 50 yards to see how badly it needed to be zeroed.  While it was off a little bit, it was close enough to keep on the mini e-type plate.  That meant while popping clay pigeon fragments on the 100-yard backstop we had to holdover a bit, but the rounds were consistent and fell one on top of the other.  I'll be looking forward to more hands-on time with the Banshee so I can bring more empirical data collection regarding accuracy, but for the moment I am without major concerns. With regards to reliability, I'll first say that I don't feel like a single range day with ~400 rounds of ammo is a conclusive test.  It is however, all I have to go on (so far!).  The Banshee arrived clean and left less clean.  It didn't get a planned cooling-off, nor any lube added.  The ammo, the gun, and the mag all agreed with each other and chewed through our allotment of 40gr FMJ's just fine.  Much like with accuracy, I'll look forward to chewing some more rounds through one of these 5.7 Banshees, and being in general more abusive to find out just what it can take. 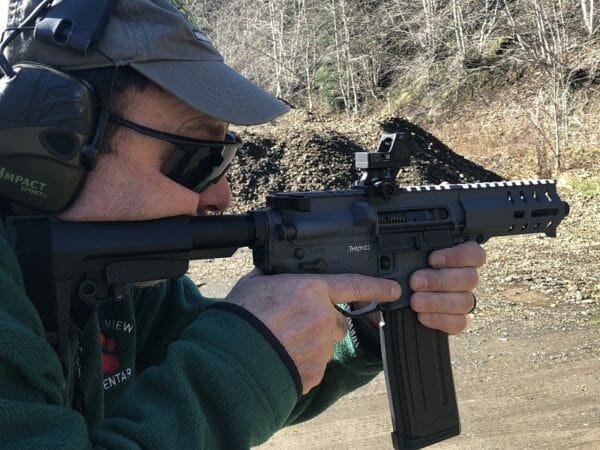 CMMG Banshee 5.7×28 ARWith a lot of SKU's, there's a wide variety in pricing.  I recommend checking out CMMG's website for all the details, but I'll give you the low/medium/high examples.  The 5″ barrel and BCG kit runs $399.95.  The 5″ upper receiver group (complete) with 3×40 round mags runs $799.95.  The Banshee 300 series pistol runs $1424.95.  There's a lot of options in between those bookends, so check out their website and see what meets your needs. I had a great time out at the pit, and appreciate Chevalier Advertising putting this together.  I really enjoyed my time with the CMMG Banshee in 5.7, as well as the other guns out that day.  Stay tuned for more coverage! About Rex Nanorum