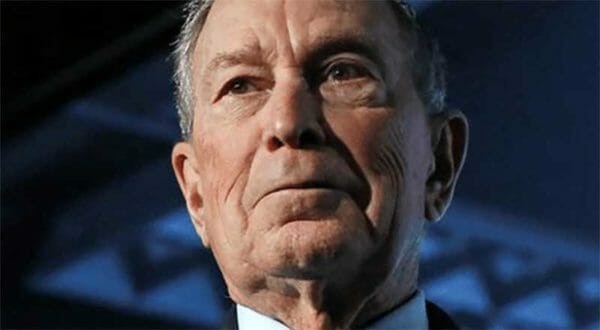 Michael Bloomberg, IMG NSSFUSA – -(AmmoLand.com)- Michael Bloomberg’s disdain for gun owners is well documented, but that didn’t stop him from reminding voters how he loathes the idea of Americans exercising freedom. Bloomberg, the billionaire presidential candidate for the Democratic nomination, denounced the notion that free men and women would choose to provide for their own protection. He sat for an interview with MSNBC’s Al Sharpton to burnish his appeal to African American voters. During that interview, he revealed his ignorance of the Constitution, existing criminal law and his frustration with freedom-loving Americans who dare to challenge the gun control godfather. Bloomberg said, “The whole issue of getting guns off the streets, I’ve fought the NRA tooth and nail, and I continue to do that, and we have this organization of 6 million people, Everytown it’s called or Mom’s Demand Action around the country to get good laws, background checks, so you don’t sell guns to minors, people with psychiatric problems or people with criminal records. They shouldn’t be able to buy a gun. I’m not a big fan of everybody having guns. But the Second Amendment gives you the right. I can’t do anything about that.” The obvious implication is that he would if he could. History Lesson Here’s the first problem. The former New York City mayor knows, but won’t admit, the Second Amendment doesn’t give anyone the right to keep and bear arms. It protects it. That right is Creator-endowed and pre-existing, just as is the right to free speech, exercise religion and protection against unreasonable search and seizure. Sir William Blackstone noted this in his seminal work, Commentaries of the Laws of England, published in 1760, the source of common law and Framer’s Constitutional foundation. “[T]he principal aim of society is to protect individuals in the enjoyment of those absolute rights, which were vested in them by the immutable laws of nature, but which could not be preserved in peace without that mutual assistance and intercourse which is gained by the institution of friendly and social communities,” Blackstone wrote. “Hence it follows, that the first and primary end of human laws is to maintain and regulate these absolute rights of individuals.” Blackstone’s writings have often been scoured by U.S. Supreme Court justices. The late Justice Antonin Scalia understood this when he studied them to reach the landmark 2008 Heller decision, which affirmed the Second Amendment protects an individual right that pre-existed the Constitution’s drafting. It does not create the right. Justice Scalia wrote, “Blackstone, whose works, we have said, ‘constituted the preeminent authority on English law for the founding generation,’ cited the arms provision of the Bill of Rights as one of the fundamental rights of Englishmen.” He added, “It was, he said, ‘the natural right of resistance and self-preservation,’ and ‘the right of having and using arms for self-preservation and defence.’ Other contemporary authorities concurred. Thus, the right secured in 1689 as a result of the Stuarts’ abuses was by the time of the founding understood to be an individual right protecting against both public and private violence.” Laws Already Exist Bloomberg’s second glaring omission is the obvious fact that the laws he is calling for  – to have thorough background checks, no selling guns to minors and no guns for those with dangerous psychiatric problems or criminal records – already exist. Radio host and book author Dana Loesch recently called out his duplicity on Fox and Friends. Watch the latest video at foxnews.com “Literally, everything he said there is already existing law,” Loesch explained. “Him and his organizations always say, ‘You know, we really need to close, you know, these loopholes in background checks. There’s no such thing as a loophole. If you drive on a suspended license, if you get a DUI and you’re still driving, that’s not a loophole. That’s a criminal act when people break the law, that’s not a loophole.” Bloomberg’s real problem is that Americans choose to own guns in the first place. This wasn’t the first time he’s said flat-out that Americans shouldn’t own guns. He publicly said only law enforcement should have the right to self-defense after Jack Wilson drew his firearm and stopped a murderer from killing more in the West Freeway Church of Christ in White Settlement, Texas. “It’s the job of law enforcement to have guns and to decide when to shoot,” Bloomberg explained at a campaign stop in Montgomery, Ala. “You just do not want the average citizen carrying a gun in a crowded place.” These aren’t the thoughts of words for someone who would swear to uphold and defend the Constitution of the United States. Bloomberg’s disdain for the Constitution and the rights of free individuals disqualifies him from taking up the oath of office.