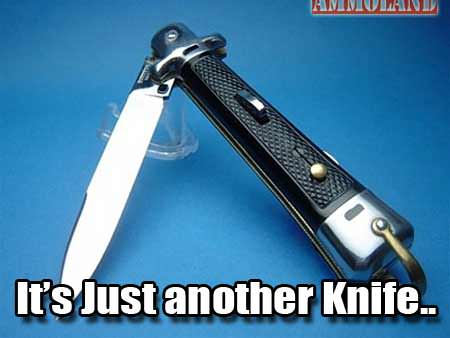 SwitchbladeUSA – -(AmmoLand.com)- Knife Rights: Washington state “Spring Blade” (Switchblade) Knife Ban Repeal bill, SB 5782, was reported out the House Civil Rights & Judiciary Committee by a 12-3 vote with a  “do pass” recommendation.  The next step would be a vote by the full House. We will let you know when it is time to contact House members. Thanks to the hundreds of Washingtonians who used the Knife Rights' Legislative Action Center to email the committee members. It had a huge impact!. Knife Rights would also like to thank Committee Chair Christine Kilduff for allowing the bill to come for a vote and Ranking Member Morgan Irwin for his support. Knife Rights' has helped enact 16 Switchblade Ban or Restriction Repeals since 2010: Alaska, Indiana, Kansas, Maine, Missouri, Montana, New Hampshire, Nevada, Oklahoma, Tennessee, Texas, and Wisconsin.

About Knife Rights Knife Rights is America's grassroots knife owners' organization and the Second Front in Defense of the Second Amendment™. Knife Rights is Rewriting Knife Law in America™ and forging a Sharper Future for all Americans™. Knife Rights efforts have resulted in 31 bills enacted repealing knife bans in 22 states and over one hundred cities and towns since 2010.