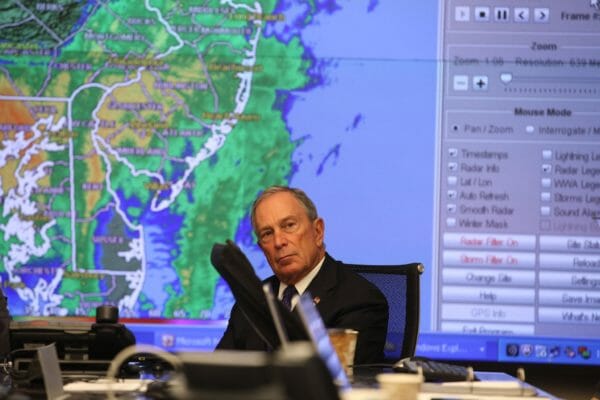 “The world is not enough.” Maybe if billionaire Bloomberg worried more about the health of his countrymen and less about cheap labor, we’d be better able to intercept foreign health and other threats coming into this country. (Mike Bloomberg/Facebook)U.S.A. – -(Ammoland.com)- Continuing with his M.O. of hiring slick ad agency illusion casters to make him look good, billionaire Democrat presidential election buyer Mike Bloomberg has “starred” himself in another expensive commercial, airing Sunday on CBS and NBC. This one has been professionally designed to make him look like he could be speaking from the real Oval Office he’s trying to procure. The subject of his latest propaganda piece, self-servingly titled “Leadership in Crisis,” is how he is the one equipped to save us from the dreaded coronavirus now making its way across the globe. “I was first elected just weeks after the attack on 9/11 — a massive rebuilding, security and health challenge,” Bloomberg asserts. “In my 12 years in office, I dealt with a hurricane, a blackout, attempted terror attacks, the West Nile virus, and swine flu.” Of these examples, Bloomberg touts preparation to react to disasters after the fact as his forte. Tellingly, he says nothing about how his leadership could stop them from occurring in the first place, and arguably, all but the hurricane were preventable to some degree. 9/11 happened because the government lets foreign nationals into this country with no proven effective means to ascertain which could pose threats. Bloomberg’s most notable response was to tank his local approval ratings by supporting the construction of a mosque two blocks from Ground Zero. As for prevention, the recent Pensacola Naval Air Station murders by a Saudi military “student” show us even with so-called “background checks,” lethal foreign threats from radical Islamist killers can turn active at any time. So Bloomberg supports making sure killers have all the advantage in “gun-free zones.” It's curious that he mentioned the blackout because his trademark arrogance was illustrated in “Bloomberg’s Blackouts.” “Mayor Bloomberg called Wednesday's short East Side and Bronx blackout a ‘minor inconvenience,’ just after he declared that the subways aren't crowded, despite the fact that the chief of the state-run Metropolitan Transportation Authority is pleading ‘there's no room at the inn,’” the New York Post reported in 2007. Not only was he out of touch with the way real people were deeply affected, but there was also no apparent plan in place to fix things – just like there was a “leadership in crisis” or something. It should be noted that West Nile Virus, which first appeared in this country in Queens, was first detected in Uganda, and swine flu was first identified in Mexico and a few months later in the United States. This is all relevant because, citing economic reasons (translated: “cheap labor”), Bloomberg is a big believer in bringing in more foreign nationals and in “amnesty” for those here illegally. That’s even though continued problems of vetting for national security purposes, transmitting new diseases like coronavirus (and reintroducing diseases), and increased strain millions put on energy consumption and other infrastructure concerns remain unresolved, looming and devastating threats that could erupt at any time. The takeaway here: Everyone who claims to be alarmed by the coronavirus yet supports relaxation of admission standards to this country is a hypocrite whose selfish actions, whether motivated by votes for Democrats or cheap labor for Chamber of Commerce Republicans, is making the threat worse. That “immigration” policy, incidentally, is why I opposed Grover Norquist during his NRA Board of Directors recall controversy. As Breitbart reported in 2014, Americans for Tax Reform continued to support “Michael Bloomberg’s amnesty lobby, the ‘Partnership for a New American Economy.’” And that, despite being deliberately ignored or denied by every major “gun lobby” group except for Gun Owners of America, which is alone in recognizing that strategically manipulated demographics pose the greatest threat to gun owner rights. Bloomberg, and indeed all Democrats know, and not just from all credible polls but from the real-world experiences of states like California, and recently, Virginia, that opening a “pathway to citizenship” for millions from populations that are consistently 70% Democrat and anti-gun will result in supermajorities in legislatures that will then pass all kinds of anti-gun edicts, and in judges who will uphold those edicts.
https://www.youtube.com/embed/WXFmZqg8R6g
He must be lying, his lips are moving. About David Codrea: