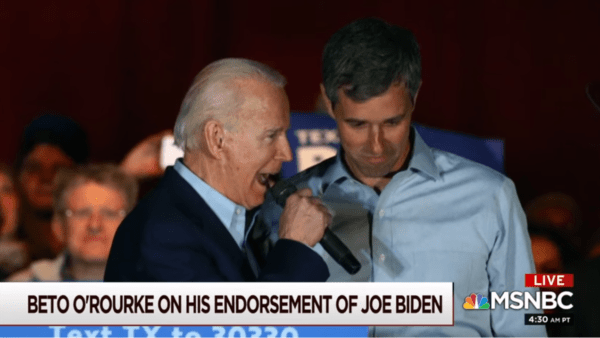 Democrat Joe Biden declared he would put anti-gun former Congressman Beto O'Rourke in as point man on guns during a Dallas rally. (Screen snip, YouTube, MSNBC)U.S.A. –-(Ammoland.com)- Would-be Democrat president Joe Biden essentially declared war on American gun owners by announcing at a Dallas campaign rally that he would put former Congressman Beto O’Rourke in charge of gun policy, according to one of the nation's major grassroots gun rights organization. The Citizens Committee for the Right to Keep and Bear Arms called Biden’s announcement “a declaration of war.” According to RealClearPolitics, Biden is now favored to win his party's nomination in July. O’Rourke appeared near the end of Biden’s speech, announcing that he would vote for the former vice president during Tuesday’s Democrat primary. In response, Biden told the audience; “I want to make something clear — I'm gonna guarantee you, this is not the last you're seeing of this guy — you're gonna take care of the gun problem with me, you're gonna be the one who leads this effort. I'm counting on you, I'm counting on you, we need you badly.” GOP Rapid Response Director Steve Guest tweeted, “Joe Biden promises Beto O'Rourke, who pushed for gun confiscation for legal gun owners, will ‘be the one who leads' his gun control effort. 2020 Democrats are unambiguous about their anti-Second Amendment agenda.” Joe Biden promises Beto O'Rourke, who pushed for gun confiscation for legal gun owners, will “be the one who leads" his gun control effort pic.twitter.com/qjgft8wFkt — Steve Guest (@SteveGuest) March 3, 2020 But it was CCRKBA Chairman Alan Gottlieb who took off the gloves, issuing a statement: “Biden’s mask is completely off. He’s not just a doddering Democrat pushing to become president, he’s an extremist anti-gunner who just promised to put a gun prohibition fanatic in charge of his administration’s gun policy.” O’Rourke infamously blurted during a Houston presidential debate last summer in Houston, “Hell, yes, we’re going to take your AR15, your AK47!” His campaign for the Democrat nomination tanked shortly afterward, and until this week, not much had been heard from O’Rourke, who formerly represented a district in West Texas. At the time, Gottlieb vowed to not let anyone forget O’Rourke’s threat. “For Biden to embrace Beto should erase any doubt where the former vice president truly stands on gun rights,” Gottlieb said in a Tuesday statement. “Months ago, we vowed to let nobody forget O’Rourke’s brazen threat to take away people’s firearms, and we meant it.” “Beto O’Rourke represents everything that is wrong with today’s gun ban extremism,” Gottlieb added, “and he is one of the worst enemies of the Second Amendment. While he was campaigning, he said gun owners would be given the option of turning in their guns in exchange for cash, or risk being prosecuted. Then he outright threatened to confiscate the firearms of law-abiding Americans.” Recalling the “O’Rourke incident” from many months ago, none of the other Democrats on stage at the time, including Biden, made any effort to counter the confiscation threat. Gottlieb said at the time that their silence confirmed a party-wide philosophy that suddenly transformed Democrats from the “party of gun control” to being the “party of gun confiscation.” Now, with The Hill reporting how “establishment Democrats” are rallying around Biden, apparently to keep Democrat Socialist Sen. Bernie Sanders from capturing the nomination, the race is shaping up to be the insiders versus the outsiders.
https://www.youtube.com/embed/FXcL_I3uTGI
Gun control has traditionally been part of the Democrat party platform, but O’Rourke’s approach lowered the bar to actual firearms seizures. Virtually all the other Democrats in the race have embraced some type of gun control, and with the entry of billionaire Michael Bloomberg—who was harshly criticized during a Manassas, Virginia Town Hall hosted by Fox News. It became so heated at one point that hosts Bret Baier and Martha MacCallum called for a commercial break. In Dallas, Biden incredibly told the crowd, “The days of Donald Trump's divisiveness will soon be over.” Yet he subsequently declared O’Rourke would be his partner to “take care of the gun problem with me,” essentially driving a wedge between himself and America’s estimated 100 million gun owners.
About Dave Workman