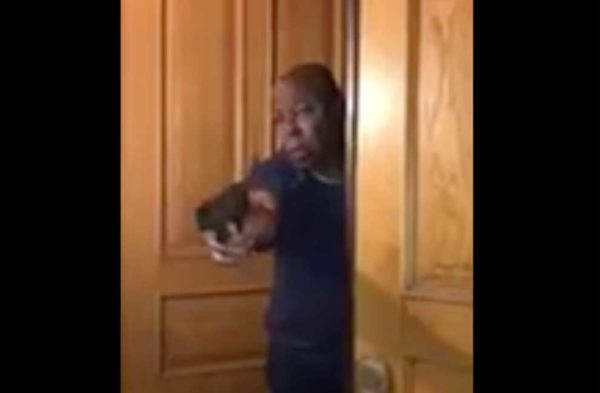 LAPD Has No Excuse for Not Arresting DA’s Husband for BrandishingU.S.A. – -(Ammoland.com)- “Los Angeles DA's husband pulled gun on Black Lives Matters protesters.” NBC News reported Monday. “Jackie Lacey, L.A. County's first black district attorney, has been the target of regular protests over the office's handling of high-profile cases.” What happened? Were the protestors violent? Did they make threats or display weapons? “I’m [in] front of DA Jackie Lacey’s house for that community meeting she promised with the @BLMLA [Black Lives Matter-LA] crew,” protestor Melina Abdullah, a professor of Pan-African Studies at Cal State Los Angeles tweeted, along with a video of the encounter. “Rang her bell to invite her. Her husband pulled a gun, cocked it, pointed it at my chest and said ‘I’ll shoot you. I don’t care who you are.’” I’m front of DA Jackie Lacey’s house for that community meeting she promised with the @BLMLA crew. Rang her bell to invite her. Her husband pulled a gun, cocked it, pointed it at my chest and said “I’ll shoot you. I don’t care who you are.” @WP4BL @RealJusticePAC @shaunking pic.twitter.com/WtazUWSJIC — Melina Abdullah (@DocMellyMel) March 2, 2020 True, Abdullah and “protest organizer Justin Marks” along with a crowd of followers were there early enough for many to consider inappropriate, but consider counter-allegations that Lacey had ducked meetings before. In any case, she was quick to make excuses. “Lacey told reporters … that she and her husband were the only people inside their house — and they were justifiably afraid when a large group arrived before the sun was up,” NBC relates. “This morning my husband and I were at home asleep when we began to hear noise outside of our home. We immediately jumped out of bed and I called the police. I wasn’t sure what was going on and I let them know I thought there were protesters outside of my house,” Lacey said. Then you sit tight. If they’re not trying to breach the door, it’s stupid to open it. Unless you’re Joe Biden, in which case you just shoot through it. There was certainly no legal justification to open the door and aim a gun point-blank at unarmed people who have announced their reasons for being there in measured tones and not made any verbal or physical threats. And the husband having his finger on the trigger—including when he lowered the weapon – shows either a callous disregard or else total ignorance of the cardinal rules of gun safety as developed by “Gunner’s Guru” Col. Jeff Cooper. It’s also a crime, at a minimum a violation of California Penal Code: “Every person who, except in self-defense, in the presence of any other person, draws or exhibits any deadly weapon whatsoever, other than a firearm, in a rude, angry, or threatening manner, or who in any manner, unlawfully uses a deadly weapon other than a firearm in any fight or quarrel is guilty of a misdemeanor, punishable by imprisonment in a county jail for not less than 30 days.” “[Lacey’s] office said the LAPD will investigate the incident and share findings with an independent prosecutors, most likely the California Attorney General’s Office,” the NBC report notes. It nonetheless has the appearance of “Big Club and you ain’t in it” favoritism. Consider if you pulled a gun on people outside your door who weren’t trying to break in or otherwise threaten you. You would already have been arrested and arraigned. And you know what? You’d deserve to be. You don’t pull a gun on someone unless you’re ready to use it, and if you do, you’d better make damn sure the threat is real. But now consider if they were black and you were white, and you’d be lucky to escape hate crime and domestic terrorism charges. If you and your spouse were politically prominent Republicans, your careers would be over after being forced to resign in disgrace. Instead, we have the same people who would demand that defending Lacey and her husband on the Black Lives Matter LA Twitter feed, citing the hour of the protest and all kinds of excuses besides legal ones to justify what they term “gun violence” committed by one of their own. Tangentially related, how many times have we heard idiot gun-grabbers claim gun owners have “white privilege” because if black protestors showed up armed, the police would use lethal force to stop them? Aside from the cognitive dissonance of nevertheless wanting the cops to be the “Only Ones” with guns, that just does not bear out in reality, as more than amply demonstrated by the racial camaraderie exhibited at the Virginia Capitol rally. As much as the antis and their media co-conspirators want to spread the smear that we are white supremacists and Nazis, it’s not we Right to Keep and Bear Arms advocates who want to disarm peaceable people of all races, it’s them. Mike Bloomberg is the one who wants a different set of rules for minorities. If they’re really all in for “common-sense gun safety,” you’ll see them howling just as loudly over arresting David Lacey as they would if he were a white Republican NRA member. About David Codrea: