CMMG MK47: It’s Still The Mutant To Me – Video Review

CMMG MK47: It’s Still The Mutant To Me – Video Review

https://www.youtube.com/embed/JesVbINaS28
U.S.A. –-(Ammoland.com)- This is the CMMG MK47, sometimes affectionately knows as the Mutant. This rifle really shook up the AR-15 and AK-47 world 5 years ago when it initially launched, and it also undoubtedly put CMMG on the map and cemented them as a major player in the AR-15 world. It started the trend at CMMG to adapt probably the most ergonomic rifle ever conceived, the AR15, to nearly every caliber ever conceived. Something CMMG is extremely well known for today.  To fully understand the big deal behind the MK47, we have to remember what it was like 5 years ago. Several companies tried to adapt the AR platform to the 7.62×39 round with limited success. Problems would usually arise in these other rifles due to 2 main issues. The first one being getting the rifle to reliably function. The AR pattern magazines that fed the 7.62×39 round back then were somewhat lacking and caused a ton of malfunctions. The massive second issue was if you could get the rifle to feed for awhile, the thin AR-15 556 bolt face that was bored out to accept the much larger round would crack, leaving a somewhat displeased owner. 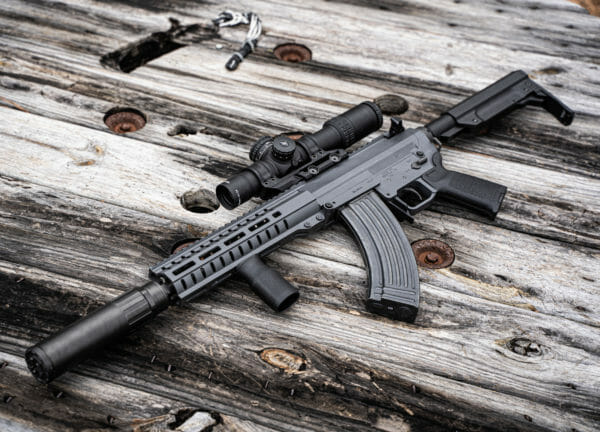 CMMG MK47Well, CMMG dropped what at the time may have been the biggest thing to hit the AR-15 world to that point, the MK47 Mutant. This crazy looking rifle addressed these issues and more. It completely eliminated the AR-15 pattern 762×39 magazines and replaced them with the extremely proven and extensively tested and reliable AK-47 magazines. They addressed the bolt issue by using what is essentially an AR-10 sized bolt, meaning that the walls of the bolt face are still very thick when they’re machined out to hold the larger round. Not only that, but they actually came up with their own receiver size. AR-10s can be a little big and bulky, so they made this AR-10 sized bolt function in a mid-size receiver set that is slightly larger than an AR15, but significantly smaller than an AR10. That is what makes up a mutant, a combination of an Ak-47, an Ar-15, and an AR-10; and for those who have had the opportunity to shoot one, it’s a thing of beauty. 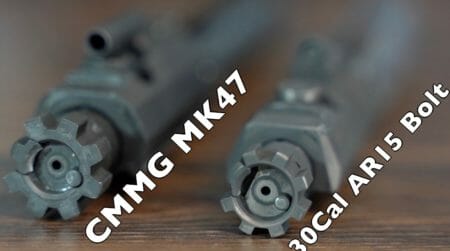 CMMG MK47 bolt (left)There’s also probably nothing tougher than a Mutant, and that’s not just me massaging CMMG’s ego, it has been tested and documented. I’m sure you’re familiar with Iraq Veteran’s meltdown videos. Where he just constantly runs a gun on full auto until it has a catastrophic failure. The Mutant survived over 300 rounds more than an AK-47 before failure in his meltdown. CMMG also has a mutant that they take to events and continually fire on full auto. Mag dump, after mag dump, giving it the occasionally dunk in water or ice just so the next guy in line can wrap his hands around it without getting burned. CMMG claims to have over 100 thousand rounds through that Mutant and it's still going strong. I’ve been to a couple of these events, and I’d say 100 thousand rounds may be on the lite side. 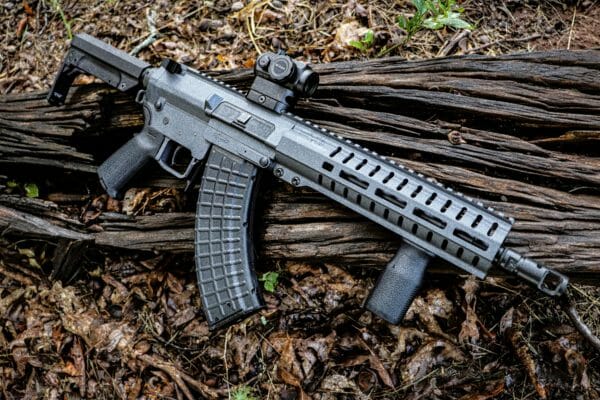 CMMG MK47If you’re not familiar with the basic features of the Mutant, let’s go through them quickly. As I’ve already said, the Mutant accepts AK magazines and it works with the overwhelming majority. I haven’t tried them all, but it works with all the mags I have; from Magpul, circle 10, US Palm, and a variety of military surplus metal mags. The MK47 also has its own manual of arms, because while it borrows from several platforms, it is unique. The magazine release is a nice and large paddle, and you can use the paddle just like you would on an AK-47. The MK47 is also available with one of CMMG’s extended charging handles, which greatly aids in reloads and, what I would call a must-have accessory. Another upgrade since the original is the rip stock, or brace. If you haven’t seen one of these, you can preset the length of pull, and just rip out the stock or brace and it will stop at the set length. My new Mutant is an SBR with a 10-inch barrel, but like I said you can get these configured however you like, SBR or pistol. The Mutant is a pleasure to shoot; the mid-size receiver absorbs the recoil well, making it a very pleasant shooter. It is also very accurate, and we were easily able to get hits on targets out to 300 yards. I like the Mutant because it kind of spreads that gap between the AR-15 and the AK-47. If you’re an AR-15 guy looking to experiment with an AK-47 and the 7.62×39 round, the MK47 is a great starting point. The same could be said for an AK-47 guy looking to get started in the AR-15 world. 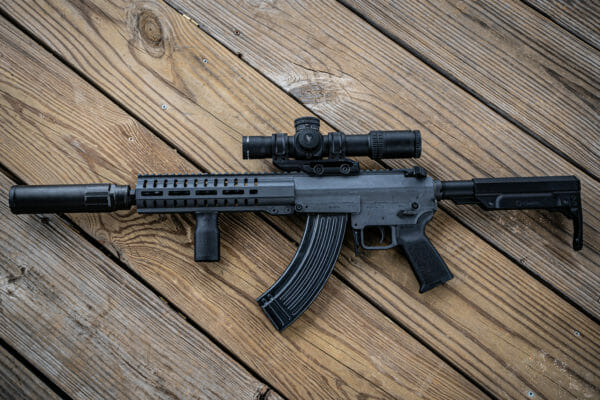 CMMG MK47I loved my original Mutant, it was actually the first CMMG I ever purchased. But, I always felt like the barrel was a little long and I wanted some of the new upgrades that CMMG offers. That’s why I decided to get this new one, and what better time to do it than the 5 year anniversary. Whether you refer to it as the MK47 or the Mutant, this is an amazing firearm that truly demonstrates firearm ingenuity. It also, at least in my opinion, is the weapon that put CMMG on the map as a major player in the AR-15 world. To go further, it paved the path that CMMG is on today; with all the amazing things they are doing with the Banshee and all the calibers that they now offer. I just have one request for CMMG, I need a Mutant in 9×39. Now that would be sick! Prices Accurate as of 3/3/2020 About Alabama Arsenal