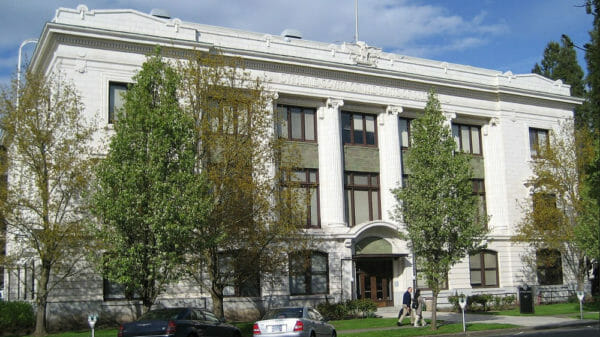 Oregon Supreme Court, from Wikimedia Public Domain, Scaled by Dean WeingartenArizona -(Ammoland.com)- On March 5, 2020, the Oregon Supreme Court ruled the dangerous referendum to require guns to be locked up, and to bypass ordinary protections of tort law where firearms are concerned, had a ballot title caption and “yes” result which did not comply with state law. From justia.com: In consolidated cases, petitioners sought judicial review of the Oregon Attorney General’s certified ballot title for Initiative Petition 40 (2020) (IP 40). If enacted, IP 40 would establish requirements for securing firearms, reporting the loss or theft of firearms, and supervising minors’ use of firearms. It would also establish consequences for violating those requirements, including strict liability for injuries caused by use of the firearms involved in the violations. After review, the Oregon Supreme Court concluded the ballot title’s caption and “yes” result statement did not substantially comply with the applicable statutory requirements. Therefore, the Court referred the ballot title to the Attorney General for modification. The court ruled the ballot title and the “yes” result did not adequately describe the effects of passing the ballot referendum, Initiative Petition 40 (2020) (IP40). There were several petitioners seeking review of the ballot title, which had been certified by the Attorney General. The Attorney General is faced with a difficult task. The ballot title is required to be 15 words or less. The Oregon Supreme Court describes some of the problems with the ballot title and the “yes” result.  You can read their decision here. The appendix includes IP40. The Oregon referendum is a cunning attack on the right to keep and bear arms.  It moves to chill the right of the people to keep and bear arms by attaching enormous civil liability to the ownership of firearms and to restrict the ways in which firearms may be kept, to extremely narrow limits. It renders illegitimate a great many common ways of keeping firearms for legitimate purposes. It transfers the responsibility for negligent and criminal acts from the perpetrator of the acts to the victim of firearm theft. It attaches enormous civil risk to the exercise of Second Amendment rights. People who possess/own firearms are given a binary choice in their possession: the firearms may be carried, or the firearm may be separately locked up. Anything else is defined, by the referendum, as irresponsible, to the point of being civilly responsible for any act committed with the firearm, outside of their control, except for defense of self or others. Persons can avoid the civil liability by reporting the loss of the firearm within 24 hours. This eliminates a great many actions which are now considered ordinary and reasonable. It gives firearms owners tremendous incentives to obtain firearms that are not registered to them. Only firearms that can be shown to have been in the possession or under the control of a person can be used to impose the draconian penalties against them. It has long been a dream of those who wish for a disarmed population, to make people who legitimately own or possess firearms responsible for the criminal acts of others. IP40 renders every purchase of a firearm through ordinary commercial channels into the purchase of an enormous, unreasonable, civil liability. An analogous chilling of First Amendment rights would be the requirement to lock up your computer or phone to ensure no one was able to access it.  If you left the computer or phone unlocked, and someone slandered a person online, you would be absolutely civilly liable for all the consequences. If your phone were stolen and used to access child pornography, you would be absolutely civilly liable for it. Unless you reported the loss to the police within 24 hours. IP40 essentially removes firearms, which can be connected to ordinary people, from the category of items that ordinary people would commonly allow in their lives. It goes a great way toward defining firearms as illegitimate. IP40 is very similar to defining firearms as a deadly virus that may be possessed under extremely limited and strict conditions. It is no coincidence the agency IP40 gives the power to define what is adequate storage, is the Oregon Health Authority. People who have made the decision to be voluntarily unarmed see no cost to themselves in imposing enormous costs on gun owners. They are unwilling to admit the enormous benefits of people owning firearms. The Oregon Supreme Court is correct in stating the ballot title and “yes” consequences are inadequate. Will the Attorney General will be able to adequately do so in the space allowed? It seems a nearly impossible feat. Article 1, Section 27 of the Oregon Constitution only protects the right to bear arms, not to keep them, at least not explicitly. Section 27. Right to bear arms; mili-tary subordinate to civil power. The peo-ple shall have the right to bear arms for the defence [sic] of themselves, and the State,but the Military shall be kept in strict sub-ordination to the civil power[.] Keeping arms is required in order to bear them for self defense, but how they may be kept is not addressed. Would IP40 be ruled to be an unconstitutional infringement on Second Amendment rights?   Logic would indicate it would. The U.S. Supreme Court has been derelict in its duty to protect Second Amendment rights for many years. A Second Amendment case, NYSR&PA v. NYC is likely to be decided in the next four months. It may shed some light on how the court being shaped by President Trump will treat the Second Amendment in particular and the Constitution in general.
About Dean Weingarten: Dean Weingarten has been a peace officer, a military officer, was on the University of Wisconsin Pistol Team for four years, and was first certified to teach firearms safety in 1973. He taught the Arizona concealed carry course for fifteen years until the goal of Constitutional Carry was attained. He has degrees in meteorology and mining engineering, and retired from the Department of Defense after a 30 year career in Army Research, Development, Testing, and Evaluation.