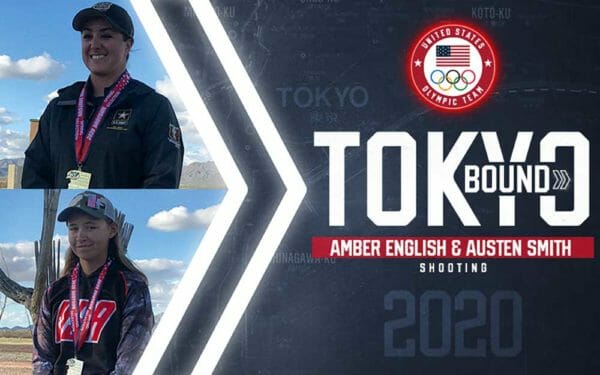 Amber English, Austen Smith Qualify For Women’s Skeet Olympic TeamU.S.A. –-(Ammoland.com)- Amber English, Austen Smith Qualify For Women’s Skeet Olympic TeamThe last time a U.S. Olympic Shooting Team did not feature Kim Rhode, Amber English was 2 years old and Austen Smith would not be born for almost another decade. Rhode competed at every summer edition of the Olympic Games from 1996 through 2016, winning an individual medal at each; she is the only woman to medal at six Games, regardless of sport or nation. Now she is passing the torch to English and Smith, who earned the right to compete at the Olympic Games Tokyo 2020 by their top finishes at the 2020 U.S. Olympic Team Trials for Shotgun, which wrapped Sunday afternoon. “Oh man, I’m just overwhelmed,” said English, who is part of the U.S. Army Marksmanship Unit, in tears. “That was a very, very stressful four days, and we have some of the best shooters in the world for women’s skeet, so I could not be happier to be on this team.” After shooting a perfect score in six of 10 rounds, English’s cumulative score was 532, followed by Smith’s 529. Sam Simonton was in Olympic qualifying position halfway through the final but ended the day two points short of Smith. Rhode was fourth with 520, followed directly by 2017 world champion Dania Vizzi (517). 2018 world champion Caitlin Connor just missed the six-woman final. English, 30, and Smith, 18, will take the torch from Rhode and run with it to Tokyo this July, where they are both eager to follow in her footsteps as Olympic medalists on a path that she blazed for a now strong and deep pool of U.S. women’s skeet shooters. This is the first Olympic Games for both, though they have had different journeys. English contended for a spot on both the 2012 and 2016 U.S. Olympic Teams, coming up short both times. She was close four years ago – sitting in second after the first stage – and ended the trials process as an alternate, after life threw her a curveball between both trials. Mike English, Amber’s father, died in December 2016 while on a diving trip celebrating he and wife Ana’s 30th wedding anniversary. Mike was a USA Shooting national team member for a decade (1978-1988), winning a world title and three Pan American Games medals, and later became board president/chairman of the national governing body. He also spent eight years with the United States Olympic Committee. Rhode, whose father used to coach Amber English, told Amber, “Your dad would be proud,” as soon as Amber knew she had made the Olympic team. “That was a huge hurdle,” Amber said of her father’s death, “and I took the alternate spot last time. I knew I had to completely change everything I was doing in my life – I joined the Army, moved (from Colorado Springs, Colorado) down to Fort Benning (Georgia) and surrounded myself with a seriously winning atmosphere, so it paid off.” In 2018, English was part of a U.S. sweep at the world championships, earning bronze behind Connor and Rhode. She also has four world cup medals to her name, won in 2010, 2016, 2018 and 2019. Her new Olympic teammate Smith, on the other hand, is far from a seasoned veteran. The teenager has only been shooting six years, and did not expect for herself to make it to Tokyo. “I’m just in shock, really. I was competing against some of the best women in the world, so just to be among them is insane, and to get past them just for a second is really great,” Smith said, laughing. The Keller, Texas, native is coached by Vincent Hancock, a two-time Olympic and four-time world champion in men’s skeet who made his fourth Olympic team earlier in the day. Smith was still competing on the junior circuit as recently as last year. Her recent medal success there showed she would be force to be reckoned with at the senior level, having won world championships silver in 2017, world championships bronze in 2018, and individual world cup gold and mixed team world championships gold in 2019. Download the Team USA app today to keep up with shooting and all your favorite sports, plus access to videos, Olympic and Paralympic team bios, and more. She credits Hancock, among others, with her rapid ascent in the sport. “He’s the one who actually got me started, so I credit him; my dad, who’s been putting in so much time and effort into my sport; and my family who’s been supporting me; and my club, Fort Worth Trap & Skeet, they’ve accommodated me my whole entire shooting career.” Both pupil and teacher led after the first stage of Olympic trials, held last September in Kerrville, Texas. “We push each other, we really do, and just to have him as a coach is insane as is, and just to shoot with him almost every single day and to have that mindset that he has – it’s incredible,” Smith said of Hancock. Another legend in the sport, Rhode, has indirectly shaped Smith’s career just as much. “She’s been my idol ever since the start,” said Smith of Rhode. “I’ve watched her in 2008, 2012, just everything. She’s who I’ve looked up to this whole time in the women’s skeet category. She’s who I aspire to be, really.” As for emulating the Olympic superstar, Smith made it clear she has the same goals as Rhode does. “I want a medal! I really do,” Smith said of Tokyo. “I want to do the best I can, I want to improve from here and keep on growing.” About USA Shooting:

USA Shooting, a 501c3 non-profit corporation, was chartered by the United States Olympic Committee as the National Governing Body for the sport of shooting in April 1995. USA Shooting's mission is to prepare American athletes to win Olympic medals, promote the shooting sports throughout the U.S. and govern the conduct of international shooting in the country. For more information, please visit us at usashooting.org.