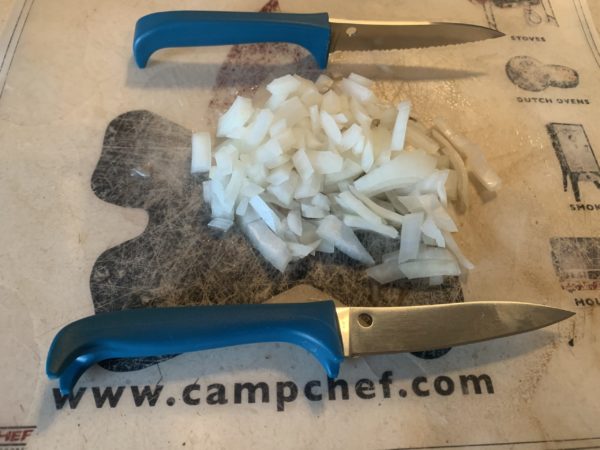 SPYDERCO COUNTER PUPPIESU.S.A. –-(Ammoland.com)- I do quite a bit of cooking but by no means consider myself anything close to being a chef. My brother is, he does quite a few cooking YouTubes. If you want to learn how to cook some super fancy meals and impress your friends and your wife, then watch his YT’s. I consider myself a camp chef and a little bit rough around the edges even for that title. You’d think as into knives as I am that I’d have a lot of famous Kitchen cutlery but…..I don’t. But after recently testing some of the Spyderco kitchen knives I can see why people rave about good quality kitchen knives. My memory was refreshed after using Spyderco’s new Counter Puppies. Spyderco Counter Puppies Kitchen Knives I never have called a knife cute but the Spyderco Counter Puppies are cute. How did they get that name? On the hilt of the handle are two prongs which along with the finger guard hold the blade up from touching the countertop. The reason for this design? In case you’ve been cutting meat on the counter or cutting board, it keeps the blade sanitary from touching the blood or meat residue. It surprises me as to how many people don’t know about cross-contamination when preparing their meals. So, let’s have a fast 2-second lesson. Raw meat can have pathogens. Pathogens are bacteria that make you sick or kill you. Such as E. Coli 0157 H7, Salmonella, Listeria etc. You don’t need to panic, just make sure you properly cook your meat. So how can we cook our steaks rare and not get sick? Because the inside has never gotten contaminated. But the inside of a hamburger patty could of actually been a meat from the surface of the carcass and thereby be contaminated. That is why you want to hit a higher internal temp on hamburgers. And to further complicate matters, Staph, even if the counts have dropped produce a spore which is what actually makes you sick and the spores are not killed by heat. But all of this will be the topic of another article someday. So for now, suffice it to say that if you worry about cross-contamination, you ought to check out the Spyderco Counter Puppies. As with all Spyderco knives that I have ever tested, these came from the factory razor sharp. So to contradict my earlier statement about not having quality knives in my kitchen I guess that as the years go by I am going to have to retract that statement because I am slowly collecting some nice Spyderco knives. So what do I see the Spyderco Counter Puppies being used for? I’ll use mine as a paring knife to cut up and slice vegetables. If you smoke a flank steak and want to slice it paper-thin like pastrami, that too. Or if you make Sushi and want to slice your fish super-thin, they’d excel at that too. They come in two handle colors, blue or purple and two blade choices. Serrated or a plain edge. I favor the plain edge but that is strictly a personal preference. I have not used it enough yet to get dull but when it does I plan on retouching up the edge with my smooth steel. You can purchase a Spyderco Counter Puppy for an MSRP of $30.00. And as is usual, we will close with the specs. But before we do, I want to throw out one word of caution. You need to keep these knives in a wood knife block or get a clamshell plastic Forschner sheath. You don’t want them laying in the kitchen sink or loose in a drawer or someone will get cut bad. About Tom Claycomb

Tom Claycomb has been an avid hunter/fisherman throughout his life as well as an outdoor writer with outdoor columns in the magazine Hunt Alaska, Bass Pro Shops, Bowhunter.net and freelances for numerous magazines and newspapers. “To properly skin your animal, you will need a sharp knife. I have an e-article on Amazon Kindle titled Knife Sharpening #ad for $.99 if you're having trouble.”