Americans Must Not Let Schumer Off The Hook: Much Is At Stake For Our Nation

Americans Must Not Let Schumer Off The Hook: Much Is At Stake For Our Nation 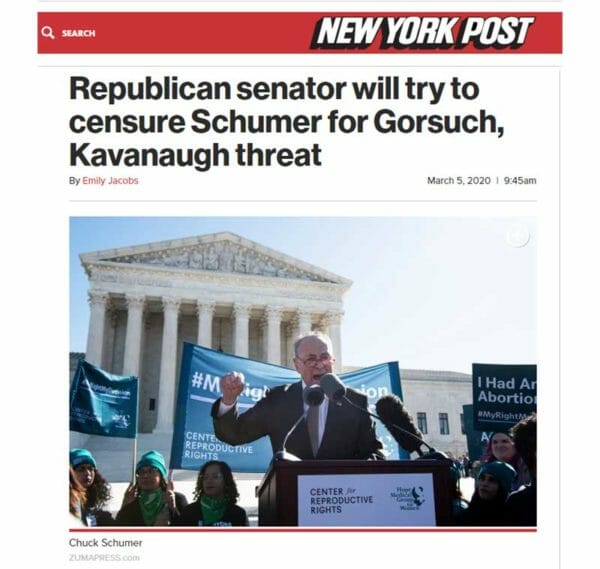 Republican senator will try to censure Schumer for Gorsuch, Kavanaugh threat New York TimesNew York – -(AmmoLand.com)- Justice Roberts properly chastised the Senate Minority leader, Chuck Schumer (D-NY). And Senator Josh Hawley (R-MO) has introduced a Motion to censure Schumer. But you should make yourself heard as well. We urge you to call members of your Congressional Delegation. Tell them to take firm action against Schumer, as he has disgraced the Nation. The phone number is: 202/ 224-3121. That number will connect you to the switchboard operator in the Capitol Building, who will patch you through to your Congressional Representatives and U.S. Senators. The Entire Democrat Party Is “Unhinged.” Representative Steve Scalise (R-LA) had a point when he said the Speaker of the House, Nancy Pelosi is “unhinged,” after she made a show of ripping up the printout of President Trump’s State of the Union Address. But it isn’t Pelosi, alone, who is unhinged. The Radical Left and the so-called Establishment itself is unhinged. Very few people expected Trump to prevail over Hillary Clinton. But prevail over Clinton, he did. Donald Trump, not Hillary Clinton, is sitting in the White House because the American people realized that our free Constitutional Republic was being eroded. The American people elected Trump to be our 45th President to set our Nation back on course, in accordance with the blueprint established for our Nation, created by the Nation’s founders: the U.S. Constitution. But there are forces at work in the world that will have none of that; want none of that. There are forces at work that seek to crush our Nation and its people into submission. These forces are massive and formidable. They comprise the Radical Left in Congress; the bloated Bureaucratic Deep State; the seditious Mainstream Media; much of the academia; various powerful and inordinately wealthy business and financial neoliberal Globalist interests; and Radical Left and New Progressive elements in local and State Governments and among the polity. Since the early 1990s, through the Administrations of Bill Clinton, the two Bushes, and Barack Obama, our Nation has set sail on the wrong course: to be merged into a one-world Government, a “New World Order.” The election of Hillary Clinton would have continued that process. The American people sensed this. They didn’t want it. They threw a wrench into the Globalist Collectivists’ plan through the election of Donald Trump to the U.S. Presidency, not Clinton. And, ever since, the Globalist Collectivists threw the weight of their resources to dislodge Trump, trying to convince the American public that this is a good thing to do, the right and moral and proper thing to do. These ignoble, ruthless forces couch their goal in terms of “moral” duty to unseat—as they falsely assert—an “illegitimate” President. And they suggest this is necessary to serve the best interests of the American people. But that is a blatant lie. The real objective of these vile, loathsome, duplicitous forces is not the salvation of the American people, but the subjugation of the American people; and this entails the destruction of the Nation as a free Constitutional Republic. The imbecilic Mueller investigation was the first assault against our Nation, our Constitution, and our people. It failed. The ludicrous impeachment inquiry and Senate trial to remove Trump from Office was the second assault, and that, too, failed. The Ukraine nonsense was the third assault against our Nation, our Constitution, and our people, and that failed, as well. The only weapon left in the arsenal of these massive, formidable forces that are orchestrating our downfall is the upcoming U.S. Presidential Election. But, these forces have doubts about the outcome. They cannot trust the American people to do the right thing, and elect a “Democrat,” as the corrupt, loathsome Congressman, Adam Schiff, admitted, during the Senate trial to remove President Trump; hence, the desire to prevent the American people from exercising their Constitutional right to select the President to lead this Nation. Evidence of the ultimate weakness inherent in—along with the corruption, bankruptcy and emerging madness of the forces that seek to destroy this Nation—is seen in the Democrat’s remaining choices as potential nominees to take on Trump: one, an aging, crusty, angry Marxist, Bernie Sanders, who fashions himself as a “Democratic Socialist” (whatever that means); and, two, an aging, corrupt, so-called “Moderate,” Joe Biden, one-time VP who is showing unmistakable signs of incipient dementia. The Neoliberal Globalist “elites” know they can control the doddering old fool, Biden, but not the old Marxist, Sanders. The Neoliberal Globalist “elites” want to establish a unified one-world political, social, and economic governmental scheme overseen by them: the corporate and financial oligarchs, presided over by the Rothschild clan. They do not envision a unified one-world political, social, and economic governmental scheme beholden to the proletariat masses. But neither scenario is acceptable to Americans who wish to preserve the Nation in the form the founders of our Republic bequeathed to us. Election of Trump to a second four-year term will secure the continuation of our Nation as a free Constitutional Republic. With continued Republican control of the U.S. Senate, Trump will almost certainly be able to secure at least one and possibly two more confirmations to the U.S. Supreme Court. And, Trump will certainly nominate individuals to the High Court who would preserve the U.S. Constitution as conceived by the framers of it; as written; using the jurisprudential methodologies of textualism and originalism, championed by the late eminent Associate Justice, Antonin Scalia. Use of these methodologies in case analysis serves to preserve our Nation’s Bill of Rights as fundamental, unalienable, immutable, natural law. Thus, the American people will enjoy, inter alia, the continuation of free, uncensored speech. Most importantly, the continued presence of an armed citizenry will guarantee both the sovereignty of the American people and the preservation of our Country as a free independent, Constitutional Republic. That prospect makes both Globalist Marxist Collectivists and Globalist Neoliberal “Establishment” Plutocrat Collectivists apoplectic with fear and rage.