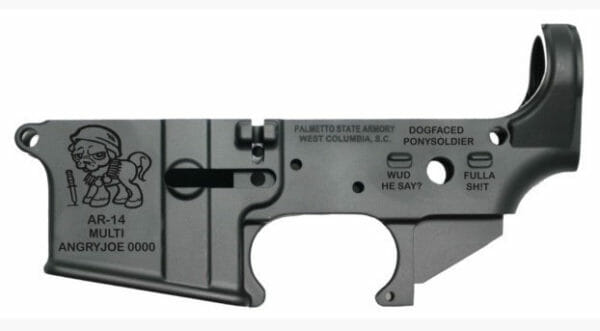 Image from PSA cropped by Dean WeingartenU.S.A. –-(Ammoland.com)- On Tuesday, 10 March, 2020, presidential candidate Joe Biden got into a shouting match with a construction worker at a Detroit Chrysler Auto plant. From the nypost.com: “I thought I was pretty articulate and respectful. I didn’t try to raise feathers,” Jerry Wayne said Wednesday during an interview with “Fox & Friends.” “He kind of just went off the deep end. … Once he got caught in a lie, I kind of wanted to ask him why he wanted to take our long arms rather than the handguns,” Wayne continued. “To me that’s very skeptical. If you care about human life, wouldn’t you want to go after the tool that’s used the most.” PSA “ANGRYJOE-14” AR-14 STRIPPED LOWER RECEIVER Former Vice President Biden has become famous for his gaffes, which seem to be becoming more frequent, disconnected with reality, and incoherent as the campaign progresses. A famous one from  February 9th, was when he called a 21-Year-Old Democrat woman a Lying dogfaced ponysoldier.  No one knows exactly what it means; Biden's staff is said to have claimed the line came from a John Wayne movie. Both “dog-faced” and pony-soldier were used in John Wayne movies. It appears no one has been able to find that particular phrase in one of the movies John Wayne acted in. Palmetto State Armory (PSA) saw an opportunity educate, promote, score political points and make a profit all at the same time. They are advertising pre-orders for a limited run of the AR-14 multi-lower receiver pictured above. They will be making 5,000 of the receivers, which can be made into either pistols or rifles, or shotguns, depending on what the purchaser desires, and what uppers they finish their firearm with. The promotional price is $49.95, which is about right for a stripped lower receiver. A multi-receiver can be converted to all of the above, if it starts out as a pistol, according to a Supreme Court case and the consequent BATFE rulings. Receivers will be limited to long gun only for shipment to California, because of California's restrictions on semi-automatic pistols. The email announcing the sale of the dogfaced ponysoldier AR-14 was sent out at 4:48 p.m. on 11 March, 2020. The promotion will end on noon, eastern time, 13 March, 2020. As of 11:18 a.m. Eastern Time, 1,734 orders, many of them for multiple receivers, had been received, according to a source at PSA.  In 18 1/2 hours, PSA had sold pre-orders which could easily account for half of the limited run of receivers. My source only had access to order numbers, not the number of receivers sold. It seems likely the run will be sold out well before the closing time of the promotion. Next Level Armament in Jenison, Michigan, had a similar idea. Their idea was rather generous. They created a rifle with AR-14 lasered on the magazine well, and 100 Round Clip Magazine lasered onto the side of a magazine to go with the rifle. Then they presented the rifle to Jerry Wayne, the worker who questioned candidate Biden during his campaign stop at the plant in Detroit. 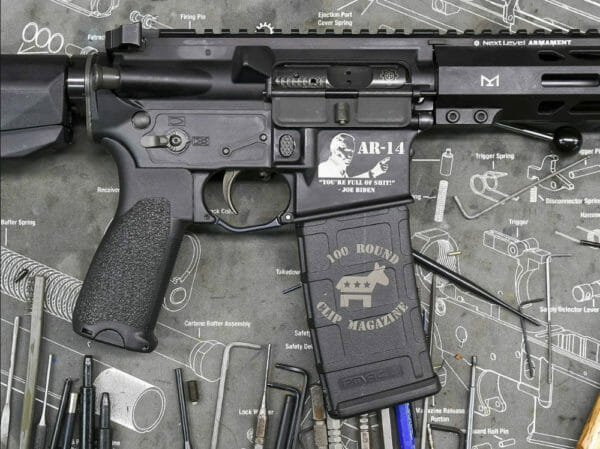 Image from Facebook, scaled by Dean WeingartenFrom Next Level Armament, on facebook: Our post just mysteriously disappeared, so here it is again! Also please go follow a true patriot @jerrywaynear14! When a patriot stands up for the 2a community it is a great thing, especially when he's from the great state of Michigan. But when @jerrywaynear14 got all up in @joebiden ‘s feels, we decided we needed to get him taken care of. Next Level Armament AR-14 edition AR-15 lasered up by @armoryvalentine for our boy. Luckily he was able to make time to stop by for a visit and we were able to present this build to him! #2a #2ndamendment #ar14 #patriot @ Next Level Armament Both responses were conceived, executed and popularized over the Internet in hours. Palmetto State Armory creates an instant collectible run of 5,000 AR-14 receivers, and Next Level Armament in Michigan creates a one of a kind AR-15 commemorating the event, and presents the rifle to the Second Amendment supporting worker in a matter of hours. The power of an accelerating information society is changing everything. About Dean Weingarten: