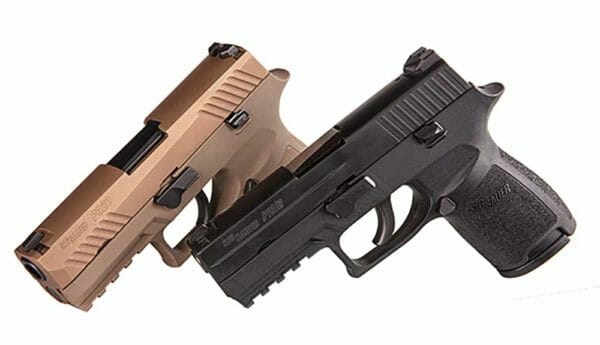 Hartley vs. Sig Sauer Class Action ResolutionU.S.A. –-(Ammoland.com)- Although plaintiffs have not proven their claims, SIG SAUER has reached an agreement to resolve a class action lawsuit alleging that P320 pistols manufactured prior to August 8, 2017, have the ability to fire when the pistol’s slide and barrel are in an unlocked condition. The plaintiffs in this lawsuit claim that the inclusion of a mechanical disconnector in the design of the P320 pistol after August 8, 2017, a feature which is also included in the free Voluntary Upgrade Program (VUP) provided to all owners of P320 pistols manufactured prior to August 8, 2017, prevents the P320 pistol from firing in this condition. SIG SAUER denies plaintiffs’ claims. By entering into this agreement, SIG SAUER is not admitting that any of plaintiffs’ allegations have merit, and plaintiffs have not proven their claims. In fact, it is SIG SAUER’s position that the design of the P320 pistol – both pre-upgrade and post-upgrade – prevents the P320 pistol from firing in an unlocked condition. SIG SAUER has conducted extensive testing of both the pre-upgrade and post-upgrade P320 pistols to confirm its position that the pistol will not fire with the slide and barrel in an unlocked condition. In late 2017, SIG SAUER implemented an upgraded design of the P320 pistol to enhance the safety and performance of its P320 model pistol. All P320 owners who purchased a pistol prior to the design change are able to have their P320 pistols upgraded through the P320 Voluntary Upgrade Program (VUP). The upgraded design and implementation of the VUP was designed to further enhance the drop safety of the P320 model pistol. Although the P320 pistol met and exceeded all U.S. safety standards, it was discovered during additional testing beyond those standards that in some cases, under very specific conditions, the P320 pistol could discharge if dropped at a specific angle. Additionally, as part of this design upgrade, a mechanical disconnector was added to the P320 pistol to enhance trigger feel and consistency, as well as to prevent a “dead trigger” condition when the trigger has been pulled with the slide retracted. Although this disconnector serves as a redundant safety against the pistol firing in an unlocked condition, it is not its primary function and is not necessary to prevent such occurrences. The SIG SAUER P320 pistol continues to meet and exceed all industry safety standards, and it is safe to carry and use in both the pre- and post-upgrade versions, when handled in accordance with the operator’s manual. However, to avoid the uncertainty and high costs of further litigation, SIG SAUER has reached an agreement to resolve this case. The forms attached below describe the rights which current and past P320 pistol owners may have under the terms of this agreement. If this agreement is finally approved by the court, these individuals may be entitled to certain benefits, including continued availability of the P320 VUP free of charge, a lifetime warranty against specific kinds of damage to the firearms, and a potential refund of amounts previously charged to repair firearms or replacement of unrepairable pistols. Please review these documents carefully to determine whether you may be eligible to submit a claim for such benefits. NOTE: IF YOU CURRENTLY OWN A P320 PISTOL THAT WAS MANUFACTURED PRIOR TO AUGUST 8, 2017, AND WHICH HAS NOT GONE THROUGH THE VOLUNTARY UPGRADE PROGRAM, YOU DO NOT HAVE TO SUBMIT A CLAIM FORM TO HAVE AN UPGRADE PERFORMED. SIG SAUER ENCOURAGES YOU TO VISIT THE VOLUNTARY UPGRADE PAGE TO DETERMINE WHETHER YOUR FIREARM IS ELIGIBLE FOR UPGRADE, AND TO INITIATE THE UPGRADE PROCESS.
https://www.youtube.com/embed/u9vIY2EoJwE
About SIG SAUER, Inc.

SIG SAUER, Inc. is a leading provider and manufacturer of firearms, electro-optics, ammunition, airguns, suppressors, and training. For over 150 years SIG SAUER, Inc. has evolved, and thrived, by blending American ingenuity, German engineering, and Swiss precision. Today, SIG SAUER is synonymous with industry-leading quality and innovation which has made it the brand of choice amongst the U.S. Military, the global defense community, law enforcement, competitive shooters, hunters, and responsible citizens. Additionally, SIG SAUER is the premier provider of elite firearms instruction and tactical training at the SIG SAUER Academy. Headquartered in Newington, New Hampshire, SIG SAUER has almost 2,000 employees across eight locations. For more information about the company and product line visit: sigsauer.com.