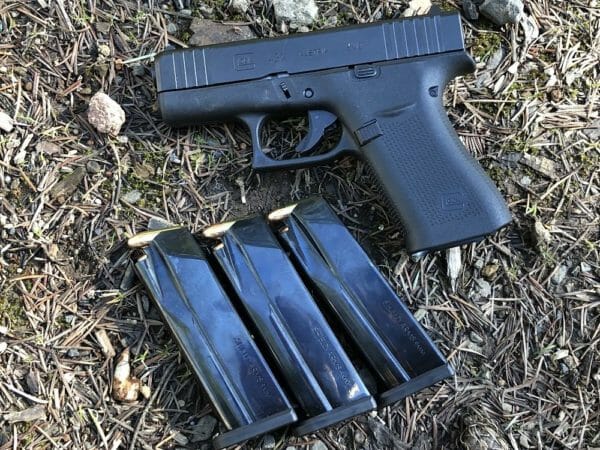 Shield Arms S15U.S.A. –-(Ammoland.com)– When Glock released their model 43x 9mm handgun, it jumped in the middle on an ongoing (and still continuing) arms race to not only make concealed carry guns smaller and lighter, but higher capacity as well.  With its slim profile and short slide, the 43x achieves a smaller size than the massively popular Glock 19.  At 10+1 rounds in the factory mag, it seemed capacity was lacking though.  While Glock hasn't responded to market desires with a bigger mag, Shield Arms has swooped in and brought us the S15, an aptly named 15-round magazine. Shield Arms S15 – 15 Round Magazine For Glock 43X & 48 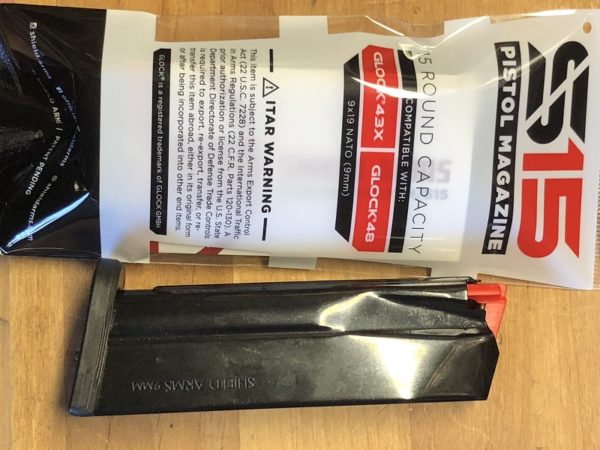 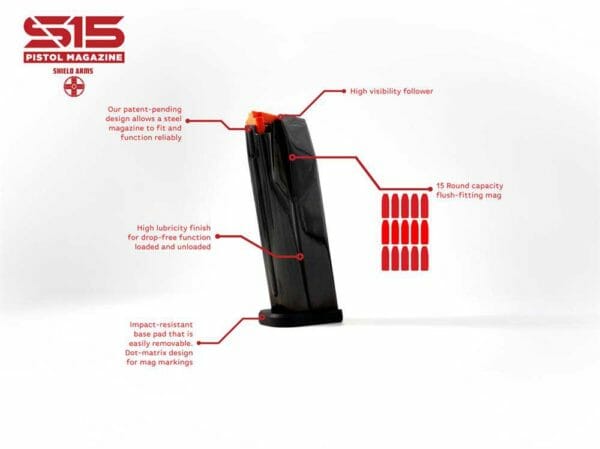 Shield Arms S15 Steel.  There's the big difference between a Glock mag and a Shield mag.  Glock uses polymer around a steel lining, which eats up precious internal space.  Shield went straight up steel alley and bumped capacity up 50% over OEM, while maintaining flush fit.  Yep, the S15 fits within the 43x magwell! Shield recommends using an aluminum mag release (to avoid wearing the polymer mag catch to the point of failure),  so I went ahead and got one of those from Shield Arms as well.  Installation takes a minute or two if you know what you're doing, and five minutes if you have to youtube instructions.  You just need a flathead screwdriver, a small one preferably. 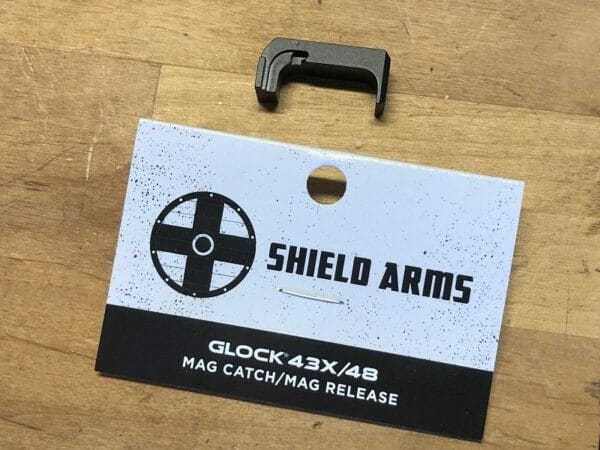 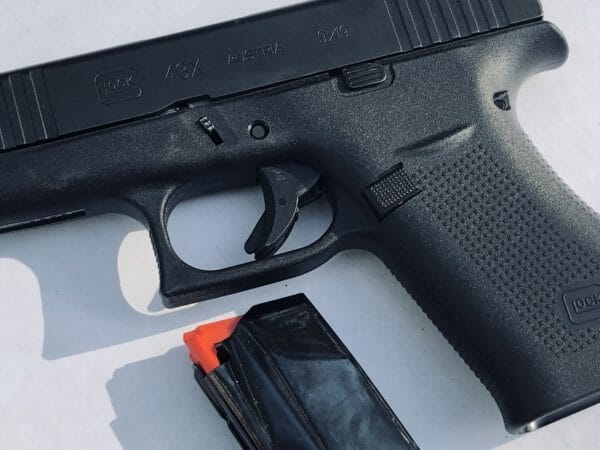 The aluminum mag catch has great textureWhile still at the shop, I ran the Shield Arms S15 mags through some reload drills and noticed they're a little on the snug side.  They'll usually drop free, but sometimes that was a bit slow.  Sometimes I needed to shake the gun a bit to give gravity an assist.  Brand new mags in a brand new gun, I'm ok with a small break in period but I'll need to see this go away.  I numbered the mags using the dot matrix on the bottom, the better to keep track of any possible misfeeds or other issues. 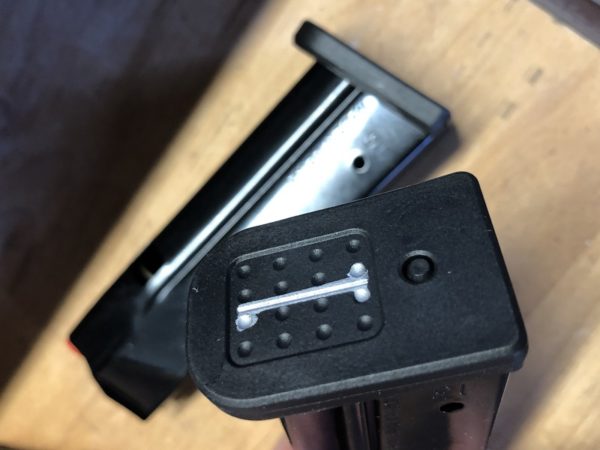 Shield Arms S15I hit the range and loaded up all three mags with Federal's American Eagle 115gr FMJ's.  Loading goes fine until 10 rounds, then the resistance really spiked.  I don't have soft, sally hands.  I've been loading mags since I was a kid, I joined the Army, loaded many more mags.  I've been loading them ever since, save for breaks to go commercial fishing back in Alaska, which develops meaty hands as well.  So believe me when I say, my thumbs were wrecked after I loaded the three mags, three times each.  Fear not, they held the advertised 15 rounds!  This is the first time in my life I wished for a mag loading device (like the one Glock includes in each new gun case, and is compatible!).  I'm looking forward to these easing up a little, given time and more use. 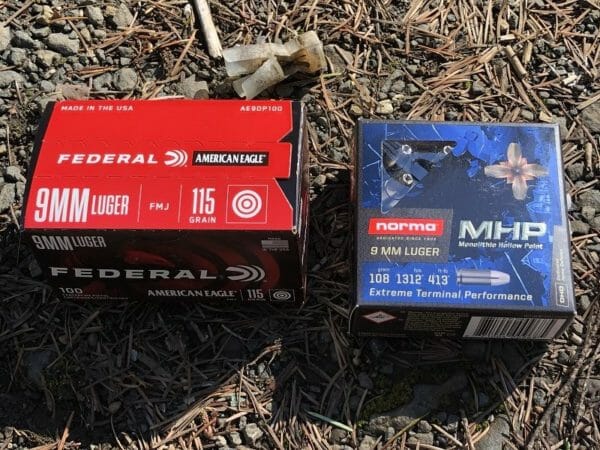 FMJ and MHP feed fine from the S15If mags are really hard to load, that sometimes spells difficulty distributing ammo in the other direction.  A spring that binds, a follower that snags, or a rough internal edge could lead to a stoppage.  Additionally, a spring that's too stiff could give excess pressure when a full loaded mag is inserted into a handgun that has the slide forward, not allowing the mag to fully engage the magazine catch.  The Shield Arms S15 mags have fed flawlessly through the first couple hundred rounds of their lives.  No stoppages, no double feeds, no problems.  There's also no problem slamming the fully-topped off mag into the gun when the slide is forward.  The gun likes the mags, and the feelings seem to be mutual.  I may not like loading em, but the S15's are a blast to kinetically empty.  The S15 ran both American Eagle's FMJ's and Norma's 108gr monolithic hollow point, which is slightly longer overall than the FMJ's.  This caused problems in another (non-Glock, non S15) used at the same range day, but no troubles here. 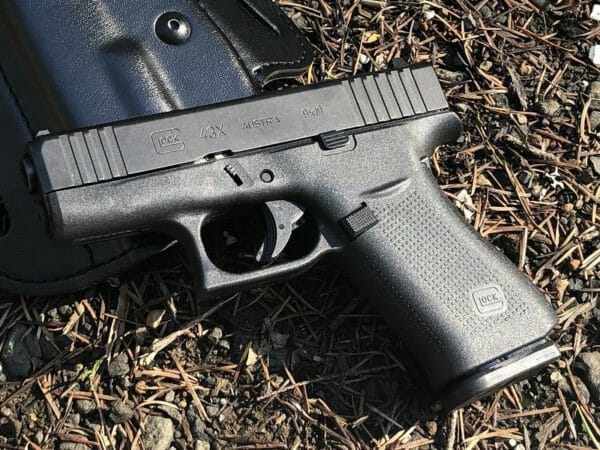 That's a flush enough fit for me, when getting 5 extra rounds.Shield Arms solved the Glock 43x's biggest shortcoming before many even knew that weakness was there.  They've made a durable, highly functional upgrade over the stock magazine that adds a 50% force multiplier.  This is a Made in the USA product, with a 100% lifetime warranty and a “Spring for Life” guarantee.  So when the $39.99 price tag hits, consider this is a “buy once, cry once” item that is covered for the rest of your life.  They weren't built cheaply, so don't expect them to sell cheap.  Buy American and buy quality!  Your life may depend on it.  I'm happy with Shield Arms S15 mags, and think you will be too.
About Rex Nanorum