Disclosure: Some of the links below are affiliate links, meaning at no additional cost to you, Ammoland will earn a commission if you click through and make a purchase.
https://www.youtube.com/embed/fvINsqlQMp8
U.S.A. –-(Ammoland.com)- The internet is home to some very good and some very bad information, and unfortunately, the subject of the AR-15 is prone to this misinformation. Luckily Brownells has taken it upon themselves to do some myth-busting videos on America's favorite rifle! In this video, the Brownells Gun Techs go over the simple but often misunderstood issue of matching an AR-15 gas system to the buffer. In other words, does a rifle length buffer need a rifle length gas system, or can a mid-length gas system run on a carbine buffer? For some of us this is a simple answer, but for the first time AR builder or new shooter getting into exercising their right to bear arms, this is easily a confusing one. If you are looking in the dark places of the internet (forums) I am sure that confusion only becomes worse. Watch the video or read the below excerpt for a quick and easy answer, we will be following the Smyth Busters series closely as I really enjoy the videos! The dynamic duo of Brownells Gun Techs, Steve Ostrem and Caleb Savant, join forces and use their combined super-powers to address the AR-15 Myth that the length of the gas system and the length of the buffer system have to match. For example, if ya got a RIFLE-length gas tube, do ya gotta have a RIFLE buffer system? The answer is NO. Once the buffer end of an AR-15 is set up to operate, it works the same regardless of the gas system up front AS LONG AS the gas system produces the correct volume of gas to cycle the bolt / carrier assembly reliably. Sometimes you do have to change the weight of the buffer, and Steve explains some of those situations. The guys have thick skins – if you think they've overlooked something or you outright disagree with them, let us know in the comments below! Buy an Upper of Your Choosing Here: AERO PRECISION – M4E1 ASSEMBLED UPPER RECEIVER 18″ 5.56 RIFLE LENGTH 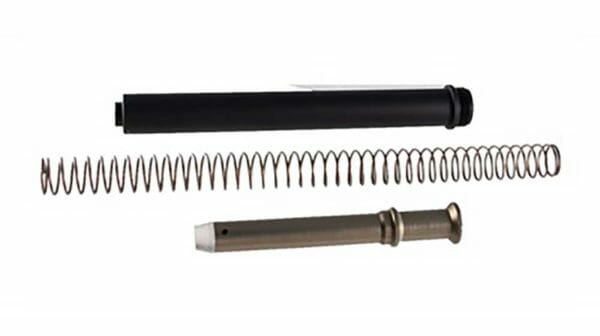