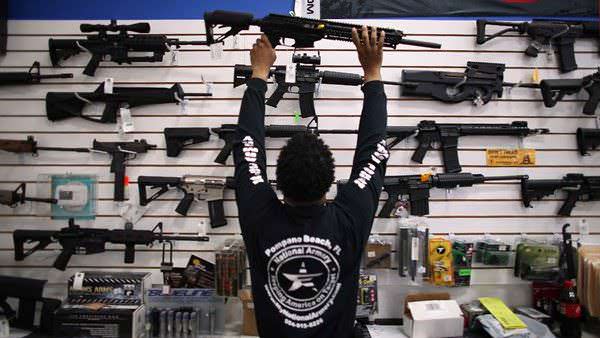 What good is the Second Amendment if the people are denied the right to buy arms and ammunition in times of national emergency?U.S.A. – -(Ammoland.com)- “Bay Area orders ‘shelter in place,’ only essential businesses open in 6 counties,” the San Francisco Chronicle reported Monday. “Businesses that do not provide ‘essential’ services must send workers home. Among those remaining open are grocery stores, pharmacies, restaurants for delivery only and hardware stores.” What about gun stores?  If we’re talking that which is essential, what is it the Founders deemed “necessary to the security of a free State”? How is that not relevant in this situation that has developed into what we are being told is a national and global state of emergency? We’ve already seen government has been utterly incapable of protecting the populace, and it appears things are only going to get worse and resources more strained. What do we do if civil order collapses, those resources are triaged and most areas are essentially left to fend for themselves? I sent a copy of the City and County of San Francisco order to a prominent name in the “gun rights” movement with resources to file legal actions and was essentially dismissed when he replied, “since there are no gun stores left in San Francisco it is of no consequence.” I’m not going to name him here because we have enough to tackle without starting another internecine squabble and I suspect he’ll come around. Remember, we’re talking “6 counties” and the Chronicle report notes “the orders…are all similarly worded.” ,[37.2320746,-122.57918]]]There are plenty of gun shops in the Bay Area. And they are not specifically deemed “essential,” which means they interpretively fall under the closure order. The thing is, there’s not a lot out there right now to corroborate my opinion coming from either government or “news” sources, so I checked some of the websites and social media accounts for some of the stores listed at the above link. From U.S. Firearms Company: “Dear customers, we are CLOSED by order of Santa Clara County due to COVID-19.” From Reed’s Indoor Range: “Reed's will be closed through April 7th. If you have a gun to pick-up, you will receive a call with further information.” Reed’s also included a link to the Santa Clara County order in their post. See “Section 10.f.” for those businesses declared “essential”: 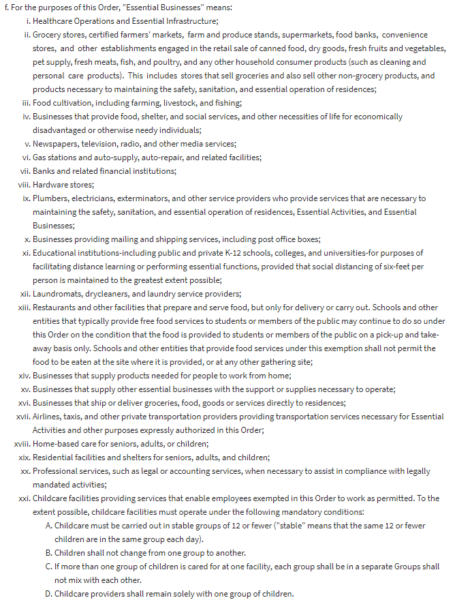 See anything missing? (Screenshot by D. Codrea)What this means is, the Bay Area’s anti-gun (in private hands) rulers could be having an eye-rolling feeding frenzy come true and be exploiting the crisis to make sure that citizens who don’t have guns and/or ammunition stay disarmed as it worsens and turns into who knows what? I put in inquiries to a couple of other places Tuesday night but they have not responded at this writing. I just got off the phone moments ago with one where the clerk confirmed they were affected and who referred me to his manager, who was understandably reluctant to speak to anyone from the media. You can't blame him, the unfair way these guys are consistently treated. Another store manager, who was not willing to go on the record due to the same reluctance to talk to media, informed me not all stores are closing including his, and that they interpret the order to exclude essential businesses, of which they consider themselves. That's the proper and principled attitude to take, but it may not prove to be one that holds up in enforcement actions, especially in the Bay Area, so I called Santa Clara County for clarification. Their rep wouldn't give me a direct answer and I am now waiting for him to email me a hotline number accessible from out of the area. If this article is posted before I get the information, I will update it when and if I do, but note when he found out what I wanted he couldn't seem to hang up fast enough (and I subsequently sent them a Facebook message). And this just in: But after customers lined up around gun stores in several counties Tuesday — including outside the Bullseye Bishop in San Jose — San Jose Mayor Sam Liccardo declared that “gun stores are non-essential.” While some will no doubt conclude Bay Area constituents are getting just what they voted for, good and hard, we have no real assurances that the same ordered closures will not happen at the national level — especially if we start seeing increased urban violence and Astroturf disarmament zealots, control freak politicians, and the media start screaming. Case in point, check out what the U.S. Department of Homeland Security considers to be “National Critical Functions”: “The functions of government and the private sector so vital to the United States that their disruption, corruption, or dysfunction would have a debilitating effect on security, national economic security, national public health or safety, or any combination thereof.” Anybody see anything in there about the Constitutional Militia, or the right of the people to keep and bear arms?  Will there ever be a time to activate “the Militia of the several States”? Before it’s too late and some of us just say the hell with it and activate ourselves out of raw survival instinct…? Of course not—the intent is for the populace to turn to a provide-all government interested primarily in maintaining and increasing its power, even when they clearly don’t know what the hell they’re doing and opposing factions are exploiting the crisis for political advantage. That’s especially troubling considering our supposedly “pro-gun” administration is still of the official opinion, even after being publicly petitioned, that “The Second Amendment gives citizens the right to bear arms.” The marketplace is essential to freedom. Constitutional scholar Edwin Viera Jr. has demonstrated, among other places, in his Motion for Leave to File Brief Amici Curiae to the Supreme Court of the United States in Kolbe v. Hogan: “This reliance on a permanent private market for firearms guaranteed that most militiamen, through their own efforts, could always obtain firearms suitable for both collective and individual self-defense, and forestalled tyranny by precluding rogue public officials from monopolizing the production, distribution, and possession of firearms.” The president doesn’t shy away from issuing executive actions on guns when they serve his purposes and he is depending on gun owners to be reelected in November. It would be more than appropriate if he ordered Homeland Security to recognize the need of the people to lawfully obtain guns during national emergencies to the point that a disruption in supply “would have a debilitating effect on security, national economic security, national public health or safety, or any combination thereof.” Do it, Mr. President. Unless it's all been just words and the Second Amendment is now officially deemed “non-essential.” Afterword: Following the submission of this draft, new questions are arising concerning the potential disruption of NICS. Also see: Coronavirus Hysteria Raises Legitimate Gun and Freedom Concerns
About David Codrea: