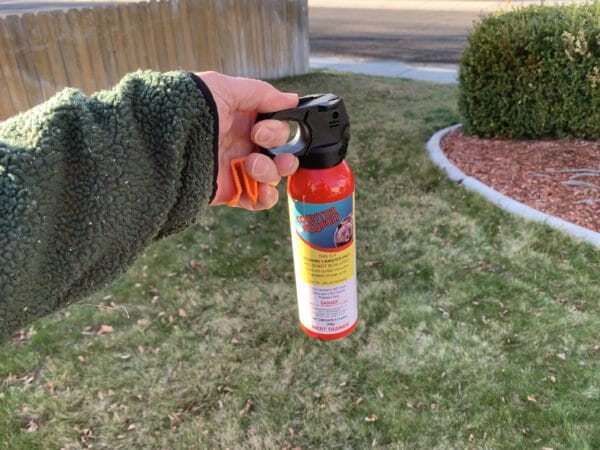 Your whole family needs to practice firing pepper spray before you're in a life and death situation; Counter Assault Training CanisterU.S.A. –-(Ammoland.com)- I’m a big believer of carrying pepper spray. My theory is, maybe you can stop a problem without shooting someone. No one in their right mind wants to shoot anyone, no matter how big of an idiot that they are. Especially some stupid kid. Hopefully they will mature in due time and turn into a real human. BUT, if you’re going to carry pepper spray then you need to know how to use it. Think about that statement for a minute. You’d be nuts to buy a pistol for self-protection and not ever practice shooting, wouldn’t you? You spend a lot of time on the range becoming intimately familiar with your pistol, don’t you? A box of ammo is at least $13.00 even for cheap stuff and yet people buy pepper spray and and won’t practice with a live canister because it cost too much. You spend 10x’s as much on ammo what practicing with one canister would cost. Counter Assault Bear Spray Training Canister 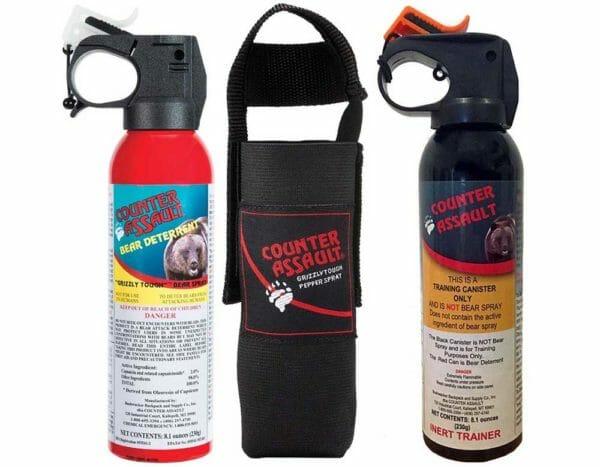 Counter Assault Bear Spray Training CanisterThe moral to the story is, you need to at least shoot once with the brand/model that you carry so you know how it performs. To help make it even more economical to practice, Counter Assault makes a Training Canister. My advice, pack their pepper spray and practice with a Counter Assault Training Canister. I carry one of the little canister of PS in my pocket and have for years but had never practiced with one before. Then came D-Day. I’m walking down a country road and two dogs charged me. He got to close so I hit him with my PS. He shook his head but didn’t seem overly concerns but finally trotted back to the front porch. I kept walking and got about 50 yds. and here he came again. This time he was PO’d and his ears were laid back. I hit him again. Same reaction. I got 200 yds. and here he came again. By now I was out of PS and had to pull out my pistol. Since I had never practiced before I didn’t know that all that it shot was a small stream, like a cheap water pistol. That is hardly worth carrying unless someone is going to stop at 3-5 ft. and let you douse them. So with that said, I just held a training session with my wife and daughter with a Counter Assault Training Canister. It had enough juice so they learned to aim better and learn how much even a slight breeze can affect your aim. I’d strongly suggest that you practice if you’re going to carry PS. It could save your life. The Counter Assault Training Canister allows you to practice at half the cost of a real PS canister. But if you decide to carry something else besides Counter Assault, then I’d advise testing with the identical PS that you plan on carrying. In the near future I will do a Product Review on the Counter Assault Bear Deterrent but first wanted to encourage you to practice with whatever you carry. The Counter Assault Training Canister has an MSRP of $16.95 and as usual, we will close with the specs. DESCRIPTION 32 feet spray distance – 7 seconds spray duration. Contains 2% Capsaicin and Related Capsaicinoids, the maximum allowed by law. Works on all bear species to deter bears from attacking humans. Great for Backpacking and Hiking. Counter Assault Bear Spray’s NEW innovative formula produces the optimal combination of spray time and spray distance. Deploys a high volume, powerful, atomized blast of highly concentrated pepper spray to deter a bear attack. Registered with the EPA, and meets the requirements of the EPA Significant new Alternative Policy (SNAP) of the Clean Air Act relating to ozone depleting substances.

About Tom Claycomb Tom Claycomb has been an avid hunter/fisherman throughout his life as well as an outdoor writer with outdoor columns in the magazine Hunt Alaska, Bass Pro Shops, Bowhunter.net and freelances for numerous magazines and newspapers. “To properly skin your animal, you will need a sharp knife. I have an e-article on Amazon Kindle titled Knife Sharpening #ad for $.99 if you're having trouble.”