Of Toilet Paper and .22 Ammunition

Of Toilet Paper and .22 Ammunition 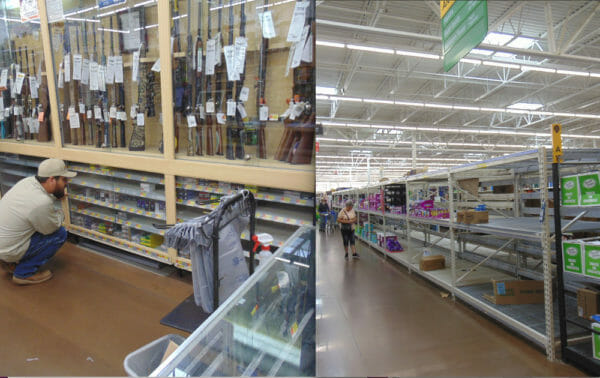 Empty Shelves at Yuma Walmart March 18, 2020 Courtesy Dean WeingartenU.S.A. –-(Ammoland.com)- Those in the gun culture can recognize the run on toilet paper as similar to the .22 ammunition bubble we experienced in President Obama's second term. Toilet paper, like .22 ammunition, takes very specialized machinery to produce in bulk at historically low prices. People became accustomed to it being plentiful, cheap, and easily available. Capital investment has been tuned by the market to meet the demand. There is only a small surplus capacity. .22 Ammunition Then, an event, unexpected by most, happened. People worried if they would have enough; with .22 ammunition, people who had been satisfied with 50 rounds wanted a thousand; the number of people who wanted much more than usual cleared out the .22 ammunition shelves in short order. Small scale entrepreneurs bought all they could in bulk, and peddled the product for 5-10 times what they purchased it for, on the Internet. This caused severe shortages for those who kept only a small amount on hand. We see the same thing happening with toilet paper. People are concerned they will be caught at home without it. The shelves have been cleared. The manufacturers are running their machines on three shifts, 24 hours a day. From cnn.com: They're faced with tradeoffs. Many were already operating their manufacturing facilities 24/7 prior to the pandemic. Now, some are limiting their facilities to essential workers and contractors. It's unclear, however, what they will do in the event that those workers get sick.  “If you ask me why everyone is grabbing toilet paper, I can't really explain it,” said Tom Sellars, CEO of Sellars Absorbent Materials in Milwaukee, Wisconsin. His company is a processor and converter of paper and related products. “It's not like we are suddenly using more of it. But the surge in demand could strain the supply chain,” he said. Toilet paper use is less elastic than the use of .22 rimfire ammunition. Both commodities can be stored for years without much of a problem. There are substitutes for both. Airguns and pellets became more popular during the .22 bubble. Bidets are likely to see an upsurge during the Chinese virus panic. Those who preached the wisdom of being prepared are mostly unconcerned. If you have studied panics and societal problems historically, you see toilet paper is one of the things that is in demand. Having six months supply on hand takes a small amount of space. Those who panic purchased will not need to purchase for a while. Neighbors will lend a roll or two to help out those who have been caught short. It is unlikely prices will escalate as much as it did for .22 ammunition. Washcloths and hand washing are available to all. A helpful hint: Do not try to flush ordinary paper or newsprint down the commode. It was not designed to disintegrate in water and may plug up the works. If you must use such substitutes, dispose of them separately, as you would disposable diapers. Our superb public sanitation system is not at risk (not so sure about California, where public sanitation does not seem as much of a concern). The electric grid is not compromised. There is plenty of clean water in the public supply system. We have an abundance of food. Those who live in rural areas are less at risk. Toilet paper factories will continue to run 24/7. Supply will eventually meet demand. There is no incentive to purchase more industrial plants to make toilet paper. People working outdoors to harvest the wood fiber needed for production are not at much risk. Unlike .22 ammunition, there is no reason to believe the base demand for toilet paper has increased. Private industry increased production to meet the demand for more .22 ammunition, but another run on ammunition is underway. I expect it to be shorter. Many retailers are saying they are emptying their shelves. If you stocked up after the .22 ammunition bubble deflated, you did the right thing. The latest panics will subside, probably much quicker than the .22 bubble did in the last decade. Toilet paper will last for a decade or more. .22 ammunition is good for 50 years or more. It is a good thing to be prepared.
About Dean Weingarten: