Parody: The Gods of the Marxist Place (apologies to Rudyard Kipling)

Parody: The Gods of the Marxist Place (apologies to Rudyard Kipling) 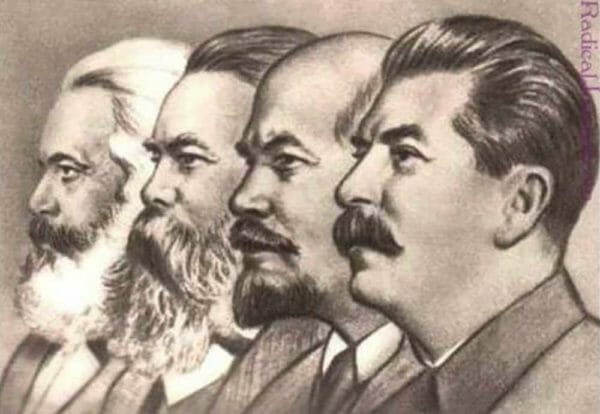 Image from commons.wikimedia.org by CarlosXVIG CC Attribution Share Alike 3.0 license scaled by Dean WeingartenU.S.A. –-(Ammoland.com)- Rudyard Kipling has long been a favorite author of mine. My parents had two volumes of his collected works, which included The Jungle Book, Kim, a number of short stories and poems. To a budding bibliophile teenager who loved the outdoors, they were magic carpet rides into the exotic. I have much appreciated his poem, The Gods of the Copybook Headings. It is a complement to common sense, tradition, and hard-won, practical conservatism. The wisdom it speaks of comes mostly from The Bible, with many direct references to Psalms, verses of which were printed on the top of British school children's copybooks (special notebooks). Kipling included an annoying glitch in the poem. When Kipling wrote the poem, in 1919, Europe had just endured one of the most destructive wars. Marxism, Socialism, and Collectivism in general, were ascendant. Kipling attributed wishful thinking, irrationality, and the creation of utopian fantasies to worshiping “Gods of the Market Place”. With a hundred years of experience behind us, no group has excelled at wishful thinking, irrationality and utopian fantasies more than Marxists, Socialists, and Collectivists, generally.  Rudyard Kipling was very much a cultural Christian. The values of Christianity permeate his literature. At the same time, he sometimes promoted early progressivism. Stanza four seems ready-made for the entire Democrat candidate field. Ammoland readers will especially appreciate stanza five, warning about disarmament. Stanza six foretold the demographic disaster in Europe, and the West, generally. It doesn't take much to bring the poem up to date with the last hundred years of experience. Just substitute Marxist for Market, ricefield for icefield, Phnom for Rome. It fits the poem very well.  I have changed “Gods of the Copybook Headings” to “God of the Copybook Headings” It seems more accurate, as most of the wisdom comes from the Bible. Here is the parody: AS I PASS through my invocations with every age and race,
I make my proper prostrations to the Gods of the Marxist Place.
Peering through reverent fingers I watch them flourish and fall,
And the God of the Copybook Headings, I notice, outlasts them all. We were living in trees when he met us. He showed us each in turn
That Water would certainly wet us, as Fire would certainly burn:
But we found him lacking in Uplift, Vision and Breadth of Mind,
So we left him to teach the Gorillas while we followed the March of Mankind. We moved as the Spirit listed. He never altered his pace,
Being neither cloud nor wind-borne like the Gods of the Marxist Place,
But he always caught up with our progress, and presently word would come
That a tribe had been wiped off its ricefield, or the lights had gone out in Phnom. With the Hopes that our World is built on He was utterly out of touch,
He denied that the Moon was Stilton; He denied she was even Dutch;
He denied that Wishes were Horses; He denied that a Pig had Wings;
So we worshipped the Gods of the Marxists Who promised these beautiful things. When the Cambrian measures were forming, They promised perpetual peace.
They swore, if we gave them our weapons, that the wars of the tribes would cease.
But when we disarmed They sold us and delivered us bound to our foe,
And the God of the Copybook Headings said: “Stick to the Devil you know.” On the first Feminian Sandstones we were promised the Fuller Life
(Which started by loving our neighbour and ended by loving his wife)
Till our women had no more children and the men lost reason and faith,
And the God of the Copybook Headings said: “The Wages of Sin is Death.” In the Carboniferous Epoch we were promised abundance for all,
By robbing selected Peter to pay for collective Paul;
But, though we had plenty of money, there was nothing our money could buy,
And the God of the Copybook Headings said: “If you don't work you die.” Then the Gods of the Marxists tumbled, and their smooth-tongued wizards withdrew
And the hearts of the meanest were humbled and began to believe it was true
That All is not Gold that Glitters, and Two and Two make Four
And the God of the Copybook Headings rose up to explain it once more. As it will be in the future, it was at the birth of Man
There are only four things certain since Social Progress began.
That the Dog returns to his Vomit and the Sow returns to her Mire,
And the burnt Fool's bandaged finger goes wabbling back to the Fire; And that after this is accomplished, and the brave new world begins
When all men are paid for existing and no man must pay for his sins,
As surely as Water will wet us, as surely as Fire will burn,
The God of the Copybook Headings with terror and slaughter returns! It has been made clear, in the last hundred years, the Market Place is much closer attuned to reality than is the Marxist Place.  China is being humbled. Russian is returning to its Christian roots. Who, 40 years ago, would have thought this would happen? About Dean Weingarten: