Medal of Honor MondayUSA – -(AmmoLand.com)- Anyone who knows the Civil War history of Little Round Top during the Battle of Gettysburg likely remembers the name of the man who held the hill, Army Maj. Gen. Joshua Chamberlain. His actions July 2, 1863, were pivotal to the Union winning that crucial battle, and, years later, they earned him the Medal of Honor. Army Brevet Maj. Gen. Joshua Chamberlain, Civil War Medal of Honor recipient, circa March 1865.Chamberlain was born on Sept. 8, 1828, near Bangor, Maine. As the eldest of five children, he grew up helping his father work on their family farm. He also got an education, graduating from Bowdoin College in Brunswick, Maine, in 1852. Three years later, Chamberlain went back to the college to teach languages and rhetoric (persuasive speaking and writing). He married his wife, Fannie, around the same time. They went on to have five children, but only two survived to adulthood. Civil War Service Chamberlain's family had served in wars dating back to the American Revolution, so he had a great appreciation for the military. When the Civil War broke out in 1861, he wanted to do his part for the Union. College administrators didn't want to allow him to leave his studies, so he asked for and was granted a leave of absence to study abroad. Instead, he joined the Army. By autumn 1862, Chamberlain was appointed lieutenant colonel of the newly created 20th Maine Infantry. The regiment saw limited action at the battles of Antietam in Maryland, and Fredericksburg and Chancellorsville, Virginia, over the following months. By May 1862, Chamberlain had been promoted to colonel and given command of his infantry unit. 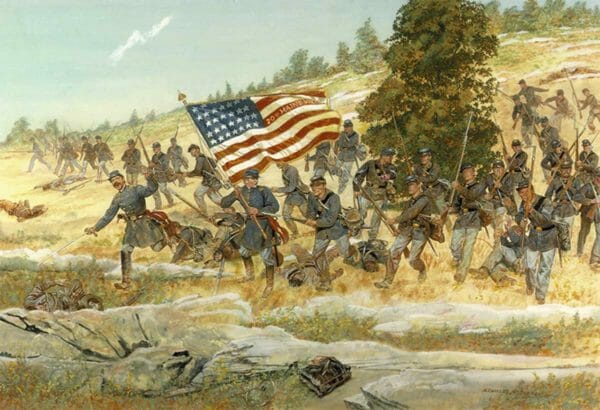 A painting depicts Union Army Col. Joshua L. Chamberlain ordering the men of the 20th Maine Infantry to run down Little Round Top and push back the Confederate soldiers during the Battle of Gettysburg, July 2, 1863.Chamberlain's fame grew out of the Battle of Gettysburg, Pennsylvania. On July 2, 1863 — the second day of the three-day campaign — the colonel's regiment had been ordered to occupy critical land between two hills, Big and Little Round Top. Their mission was to hold the far left flank of the Union line at all costs. If they didn't, the entire Union position was in jeopardy. The Confederate soldiers knew that, too. Soon after they got into a defensive position, the 20th was bombarded with attacks from the Confederacy's 15th and 47th Alabama regiments. They managed to fend off the enemy six times, but they were running low on ammunition. Chamberlain knew the regiment wouldn't be able to withstand a seventh barrage, so he ordered the 20th Maine Infantry to go on the offensive. With bayonets drawn, the soldiers charged down Little Round Top, startling enemy forces so much that they were able to force the enemy back and capture hundreds. Thanks to their charge, the Union's line, which had grown flimsy, was once again secure. A win at Gettysburg helped turn the tide of the war in the Union's favor. 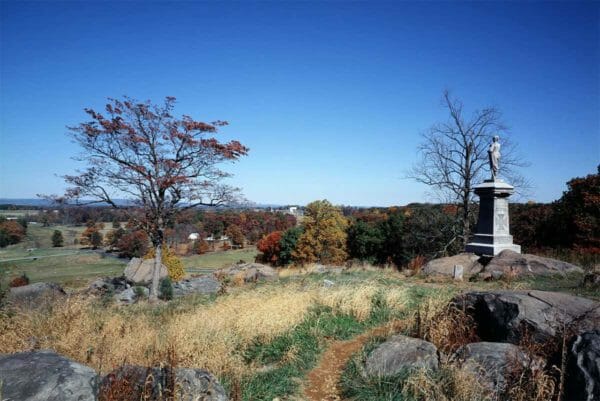 A monument stands near Little Round Top at Gettysburg National Military Park in Gettysburg, Pa.A Storied Career Afterward, Chamberlain was nicknamed the “Lion of Little Round Top,” and he continued to move up in the ranks. In June 1864, he was commanding a brigade at the siege of Petersburg, Virginia, when he was seriously injured in the hip and groin. He survived and, after months of hospitalizations, returned to the battlefield in November 1864 as a brigadier general. When the war ended, Chamberlain was chosen to receive the Confederate surrender of arms at Appomattox Courthouse in Virginia. According to the National Park Service, the then-brevet major general “ordered his men to attention as the Confederates passed as a sign of respect for their defeated foe.” Soldiers mill around the outside of Appomattox Courthouse, Va., in 1865. Dozens of Civil War soldiers holding muskets stand in front of a two-story building. More men sit on a fence, while others stand on a second-story balcony.Chamberlain left the Army in 1866 and returned to Maine, where he continued his military career as a major general in the Maine National Guard. Thanks to his wartime popularity, he was elected to four terms as the state's governor. Chamberlain went on to become the president of Bowdoin College from 1871 to 1883. He spent his last decades writing and speaking about the Civil War. Two Medals In 1893, Chamberlain received the Medal of Honor — which had been created during the Civil War — for his tenacity and heroism at Gettysburg. He was awarded two medals — one in 1893 and a second in 1904 — after Congress authorized a new design that all recipients were to receive. Chamberlain died Feb. 24, 1914. His death was attributed to the wounds he suffered during the siege of Petersburg, making him the last Civil War veteran to die of war-related wounds. He was 85. A Civil War-era version of the Medal of Honor.Chamberlain's original Medal of Honor resides with the Pejepscot Historical Society, which owns and operates the Joshua L. Chamberlain Museum near Bowdoin College. According to the school, an anonymous donor found the medal in the back of a book the donor had bought at a church sale. That church had been gifted the estate of Rosamond Allen, Chamberlain’s granddaughter and last surviving descendant when she died in 2000. The second Medal of Honor given to Chamberlain is on display at the college. Bowdoin College is also the alma mater of another Medal of Honor recipient, Marine Corps Capt. Everett Pope, who attended the school in the 1930s and earned the medal during World War II.

Joshua Chamberlain and the 20th Maine were some of the real heroes of the Civil War.
Firearms Safety is No Accident. Jim
Top
Post Reply Previous topicNext topic
2 posts • Page 1 of 1