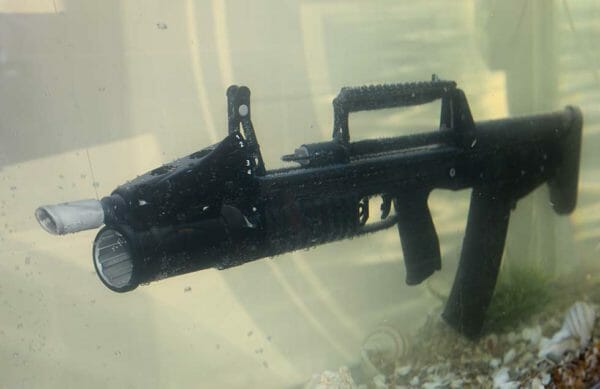 The Russian ADS Rifle at Interpolitex. IMG Source: Wikipedia Vitaly V. Kuzmin / CC BY-SAU.S.A. -(AmmoLand.com)- As long as militaries have employed combat divers, they’ve struggled to equip divers with firearms that could be fired both underwater and out of water. Historically, the solution has been to carry two different rifles: one for submerged fighting and one for use once the divers had boarded a ship or gone ashore. This made mission loadouts heavy and bulky, which is not ideal for water raids. Combat divers needed a better solution. So the Russian KBP Instrument Design Bureau designed a dual-medium rifle that worked as well on dry land as it did underwater, for more utility in a single weapon and less required gear for dive teams. That rifle is the ADS assault rifle. The ADS rifle is a legitimate solution to the problem because it’s got respectable performance both underwater and on dry land. However, as you might expect, a specialized rifle like the ADS rifle will always come with some drawbacks. So here’s what’s good and what’s not so good about the Russian ADS assault rifle. Pros of the ADS rifle The good things about the ads rifle largely revolve around the dry land performance. Most wet and dry rifle designs sacrifice a lot of dry land performance to get underwater functionality. The ADS rifle has managed to avoid this tradeoff. Pro: standard caliber and magazines
The ADS rifle fires a standard 5.45x39mm round. And it uses AK-74 magazines. The only thing it needs to fire underwater is specialized 5.45x39mm ammunition that utilizes a longer bullet that’s designed to minimize drag in water. Using standard ammunition and magazines greatly reduces the mission loadout divers need to carry. The only additional gear divers need to carry is underwater ammunition. And, since the rifle takes standard AK-74 magazines for both underwater and dry land operation, operators can simply change out magazines when they transition from submerged to above water work. Pro: solid dry land performance
The thing that really sets the ADS rifle apart from previous attempts at underwater firearms is that it performs just like a standard rifle when it’s out of the water. The maximum effective range on dry land is 500 meters, which is comparable to other standard assault rifles like the M4, HK416, and SA80. Additionally, the muzzle velocity is 900 meters per second, which is well within specs for a military rifle. Lastly, the cyclic rate is 600 to 900 rounds per minute, which produces a practical rate of fire of 40 to 100 rounds per minute. Of course, it works underwater, too. The underwater muzzle velocity is 333 meters per second, with a maximum range of 25 meters, under 5 meters of water. The maximum effective range is reduced to 18 meters when the rifle is 20 meters underwater. The bottom line of all the specs is that the ADS rifle is a dual-medium rifle which suffers no performance penalty in dryland performance to achieve underwater operation, which was the issue with the previous dual-medium weapons. Pro: accepts standard attachments and optics
This might be the most impressive thing about this rifle: it can be fitted with a suppressor, muzzle device, and standard optics. In the past, this was impossible with a dual-medium weapon. And the KBP produced a suppressor for the ADS rifle. So it’s totally capable of suppressed operation. Additionally, with standard 5.45x39mm ammunition, operators can mount standard reflex or holographic sights on the ADS rifle (provided they are waterproof). This makes the ADS rifle a much more capable rifle than any of the dual-medium weapons that Russia had developed in the past. It can be configured and adapted to meet specific mission requirements, which is common practice in special operations units.

Russian ADS rifle photographed at Innovation Day 2013. IMG Source: Wikipedia Vitaly V. Kuzmin / CC BY-SACons of the ADS rifle Even though the ADS rifle is an achievement in firearm design, it’s not a perfect platform. There are a few things to know about if you’re going to pick one of these up. Con: extremely short muzzle
The bullpup design of the ADS rifle has produced an incredibly short rifle. This is an intentionally included feature because operating inside a boat hull requires an extremely compact weapon system. However, it’s so short that it’s surprisingly easy to sweep your weak hand in front of the muzzle during weapon manipulations. For trained operators, it’s not usually an issue. But less-experienced shooters will need to slow down and take some time to get accustomed to the form factor of the ADS rifle. Con: surprisingly crowded trigger guard
The ADS rifle is fitted with a grenade launcher. The trigger guard houses the trigger for both the rifle trigger and the grenade launcher trigger. This in itself isn’t an issue. Rifle-mounted grenade launchers have always positioned the trigger near the standard trigger for efficient operation. However, both triggers on the ADS rifle are housed inside the same trigger guard. Without gloves, this isn’t a huge issue. But the trigger guard gets pretty tight if you’re wearing gloves. You might find that your glove scrapes the backside of the grenade launcher trigger, which could cause an inopportune snag. Con: requires two different types of ammunition
It might seem unfair to call this a con because it’s tough to make a dual-medium rifle that uses only one type of ammunition. But this wouldn’t be such a con if the underwater ammunition worked well on dry land. But it doesn’t. The underwater ammunition is significantly less accurate and effective. And, if you’re a civilian, the underwater ammunition is also really difficult to get. 5.45x39mm ammunition is common enough. But aquatic ammunition is hard to find. Con: grenade launcher is integrated
This is only an issue if you’re a civilian who’d like to get their hands on one of these. Most grenade launchers can be removed. The ADS grenade launcher can’t be detached.
So, if you want to get an ADS rifle, you’re going to have a bad time unless you can legally purchase a grenade launcher. Want to do some dual-medium shooting? Overall, the ADS rifle is a remarkably innovative rifle. And it’s efficient enough that Russian military units have put it into service. That’s more impressive than it might seem. Tons of attempts at solving military problems get scrapped as soon as the guys on the ground try the solution. Meeting the demands of the military in new and creative ways is hard. And the ADS rifle has managed to do that. It’s not an easy rifle for civilians to get their hands on. But, if you can get one, it’s a really cool rifle to have in your collection. Or just have the experience of shooting, especially if you can crank a few rounds off underwater.
Jay Chambers is a pro free speech business owner based in Austin, Texas. Having lived through several natural disasters and more than a few man-made ones (hello 2008), he believes that resilience and self-sufficiency are essential in this increasingly unpredictable world. That’s why he started a business! Jay writes over at Minute Man Review.