After Coronavirus, California Has a Major Disarmament Edict Waiting in the Wings

After Coronavirus, California Has a Major Disarmament Edict Waiting in the Wings 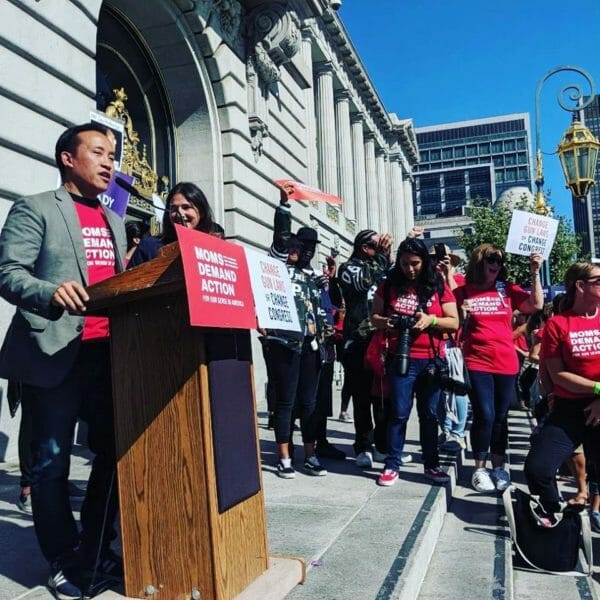 “Commonsense gun safety laws” include banning every gun on the California “safe” roster” that doesn’t have microstamping? All of them? But no one is talking about taking your guns? (David Chiu/Facebook)U.S.A. – -(Ammoland.com)- While gun owners are properly focused on the immediate threats arising from the Coronavirus pandemic and associated disruptions of “normal” life, once the manipulated crisis passes the enemies of the right to keep and bear arms will be ready to hit the ground running. That’s the case in California, overwhelmingly ruled by anti-gun (in private hands) Democrats, where the ordered closure of gun shops using the “nonessential business” excuse ignores the one thing the Founders deemed “necessary to the security of a free State.” Shortly before all eyes became focused on that, one of the more committed citizen disarmament enthusiasts in the legislature, Assemblyman David Chiu, resurrected a gun-grabber dream list priority, microstamping, a requirement for firearms to mark an identifier on ammunition casings, the San Francisco Chronicle reported. Disregard for a moment that professional reporter Alexei Koseff and his editors seem confused at times and tell readers the “unique imprint [will be left on] on bullets that are fired.” That’s not what it’s about anyway, since, after then-Gov. Arnold Schwarzenegger (warned ya!) signed microstamping into law in 2007, manufacturers stopped introducing new models and limited their California inventories to models without marking technology that had already made it on to the state’s “certified” list (and in a related story, the state Department of Justice never did ‘fess up to how a stampless “smart gun” they were greasing the skids for apparently made it on the list illegally, after the mandatory microstamping deadline). No, the object here is to ban the guns still on the list. Requiring one mark instead of two is not “‘calling [the gunmakers’] bluff’ and removing their excuse to ‘boycott the law.’” It’s dictating to supposed free citizens there are even more “in common use at the time” firearms that Democrat tyrants intend to deny them, first in California and then to any other state where the citizens are suicidally ignorant enough to vote in swindlers intent on gutting their birthrights. “It creates a mechanism for unsafe guns to be phased out and safer guns that assist with crime-solving to enter the market,” Chiu lied. All the guns on the list had already been deemed “safe” by the state in order to be included. And the technology is easily defeated by those who intend to criminally misuse guns. Not that they have to. And it will, of course, stop and/or solve no violent crimes (as if that's justification for infringing on our rights). That’s not the point. The point is to further limit the availability of firearms to California citizens by drying up their sources of supply. The state started with their stupid “drop test” requirement (as if there was an epidemic of “gun deaths” and injuries resulting from that nonexistent problem, and as if there were no remedies through the courts if there were), and then moved on to mandated loaded chamber indicators (like the kind that was on the Beretta 92 Compact L that a 14-year-old used to kill a 15-year-old during a practical joke). As if reptiles that leave brass at crime scenes get their guns through channels traceable to them. Chiu, of course, knows that. It's just another calculated harassment of gun manufacturers and dealers, designed to drive them out of business. It’s more “In your face, California gun owners!” from someone who hates and wants to disarm them. His attitude points to a tangentially-related issue that the gun-grabbers are counting on and the so-called “gun lobby” has been shamefully hiding from lest they are smeared as “haters”: Chiu is the son of Taiwanese parents who came to this country to enjoy the benefits of American freedoms unavailable in the land they fled. And we know from all credible means of observation that immigrant groups, particularly Hispanics and Asians, overwhelmingly follow their cultural biases down the “pathway to citizenship” to the Democrat/anti-gun camp. You would think a people who resisted Chi-Com tyranny would know better, but “civilians are not allowed to possess any firearms with narrow exceptions” in Taiwan. It’s not like Taiwanese citizens need to risk themselves when they have treaty guarantees that American lives, blood, and treasure will be spent on their behalf should the need arise “to maintain the capacity of the United States to resist any resort to force or other forms of coercion that would jeopardize the security, or the social or economic system, of the people on Taiwan.” Look for Chiu’s bill to pass as soon as the legislature feels it’s the best time to capitalize on the publicity, and for Gov. Gavin Newsom to happily stick it to that part of the California citizenry that doesn’t vote Democrat. And look for it to be upheld since by ignoring the core militia purpose of the Second Amendment and relying pretty much exclusively on self-defense in its legal arguments, the “gun lobby” has undermined its ability to fight for “ordinary military equipment” intended to be taken into “common defense” battles. That’s left us in a situation where courts rule as long as you can have a gun for “self-defense,” the state can limit your options on what you can keep and where you can bear it. The appropriate response, of course, if for the manufacturers who depend on gun owners for their livelihoods, to take the Barrett/Hornady approach and tell the tyrants to make, service, and supply their own damn guns, rather than continuing to supply enforcers who will use their superior armaments to disarm Americans. Just don’t hold your breath waiting for gun owners to unify and demand that of them.
About David Codrea: