Disclosure: Some of the links below are affiliate links, meaning at no additional cost to you, Ammoland will earn a commission if you click through and make a purchase.
https://www.youtube.com/embed/O6zhl1papuA
U.S.A. –-(Ammoland.com)- The term “game-changer” gets overused, in fact, there may not be a term that is more overused. However,  the SIG P365 was, and is a game-changer; other companies, for better or worse, will copy the P365 and it is a new segment in the pistol market. Sig continues to offer new variations, like the XL, which, as the name states is a little larger than the original. The P365XL measures in at about a half an inch longer and taller than the original P365.  SIG SAUER P365XL w/ Romeo Zero The magazine is at the heart of the P365 design. Sig has said the magazine was developed first, and the pistol was designed around the magazine. They have three patents on the magazine alone, and really we wouldn’t be talking about any of this if it weren’t for the magazine. This is because it is the magazine that allows the feel in your hand to be a single stack pistol, yet has the capacity of a double-stack pistol. In a gun that is only 1.1 inches wide, you get a standard capacity of 12+1, and with a slightly extended magazine, you can get a magazine of 15+1 in the P365XL model. That’s a whole lot of firepower in a gun that is this small. 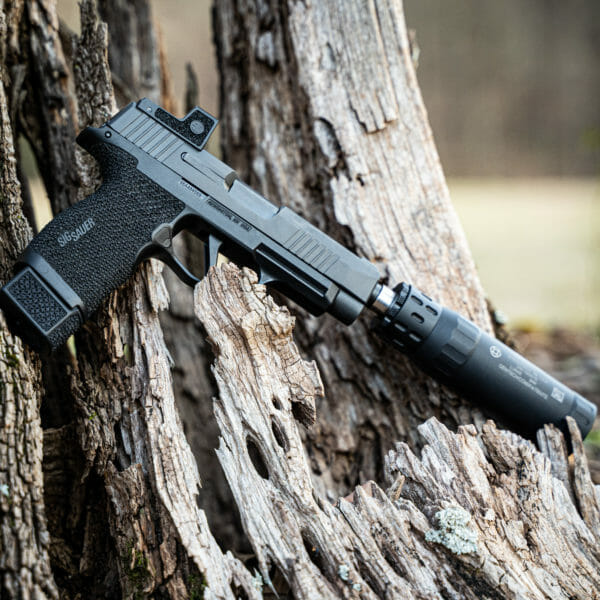 SIG P365XLI actually like the P365XL even more than the regular P365 for several reasons, and the first will seem kind of odd; I like it better because it is bigger. Even though the P365 shoots really well, the XL being bigger allows you to get a little better grip, and the longer barrel and slide help tame the recoil a little. This lets you get follow up shots off a little quicker. You can really shoot this just like you shoot a full size gun and you're not making any compromises on this being just a carry gun. I also like the greater capacity, and most of all the option for a red dot sight is a huge deal and we’ll talk about the Romeo 0 more in a minute.  The overall length of this pistol is 6.6 inches, a height of 4.8 inches, and a barrel length of 3.7 inches. What you’ll find somewhat odd, is that’s not much smaller than a Glock 19’ footprint, but it just feels so much more compact; mainly due to the width at only 1.1 inches. There are also some other great features Sig has included; a really great magazine well, that will help speed up those reloads. The included sights are phenomenal as well, they’re Sig X-rays and that gives you fiberoptic for daytime and tritium at night. Really, every feature of this pistol has been thought out extremely well, and perfected as much as possible. Sig has set the bar very high with the P365 series, and it will be interesting to see if anyone will be able to match it in the coming years. The trigger in the P365XL isn’t the best trigger ever, but it is good for a concealed carry pistol. The trigger is a little spongy and pulling at around four pounds. It's not awful, but it's definitely not great, and there’s also a fair amount of take-up. I will say that it is a flat trigger, breaks at right about 90 degrees, and has a decent reset. This does allow you to shoot the gun very consistently. It’s not an awful trigger, just with everything else on the pistol being so good, it stands out a little. 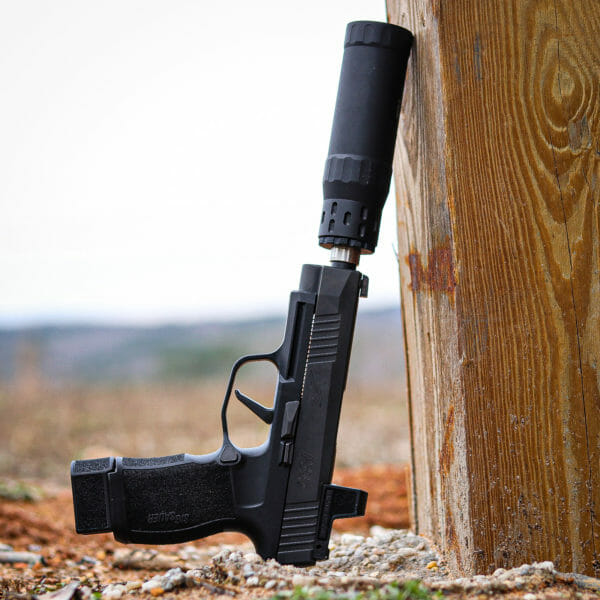 SIG P365XLOne of the best features about the Sig P365XL is the ability to attach the Romeo Zero. I wasn’t sure how I’d feel about a carry gun, especially a gun this small with a red dot, but it’s better than I could have ever imagined. If you’ve never used a red dot on a pistol, it does take a little getting used to, but once you do, the term “game-changer” doesn’t come close to doing it justice. After that initial learning curve, the rate at which it speeds up your shooting and target acquisition is more significant than any other upgrade you could possibly do to your pistol. 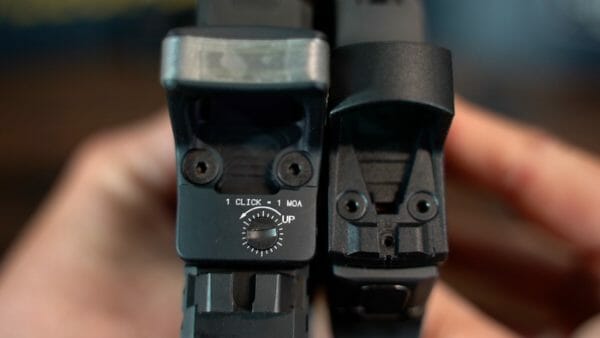 Trijicon RMR next to The Sig Romeo ZeroThe Romeo Zero utilizes the smallest footprint as of yet to fit on really small carry pistols like the P365XL. It has a polymer housing and actually the “glass” is a polymer as well. SIG says that this gives it 10 times the impact resistance of regular glass. It also weighs four-tenths of an ounce; it’s so light that you do not notice it in the slightest. The glass, or polymer in this case, is very clear, and the dot itself is extremely clear and crisp. I had no issues with it what so ever, and I do have astigmatism. The battery life is rated at 20,000 hours, and SIG claims that the long battery life coupled with the auto shut off feature, with “shake awake”, you can get 10 years of battery life. I’m not sure I’d want to go that long before changing the battery, but it is safe to say that it should last a very long time. The battery is a 1632, the sight is just too small to use a more common 2032, and you will need to remove the sight to replace the battery. 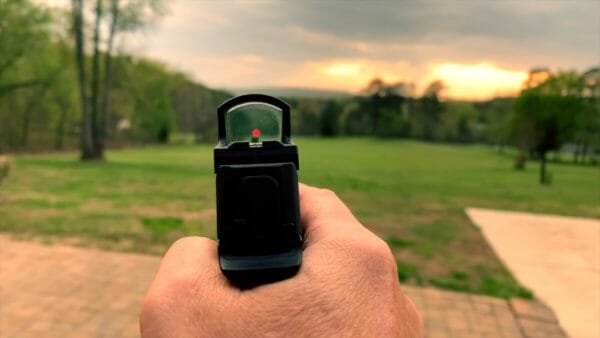 Looking through the Romeo ZeroThe brightness adjustment is a little button right behind the screen, and the elevation and windage adjustments are pretty standard. I’ve been shooting the Romeo Zero for about three months now, and I’m very happy with the Romeo 0 to this point. If I wanted to nit pick it, the adjustments offer little to no feedback, but that’s a pretty small complaint. I also really like that there is an integrated rear sight on the Romeo Zero Unit that actually lines up very well with the front sight and works as it should. I really appreciate that you don’t lose your iron sights, because after all, this is a carry gun, and it would be awful if when you needed it most, your red dot died. But no worries, you’ve still got irons. 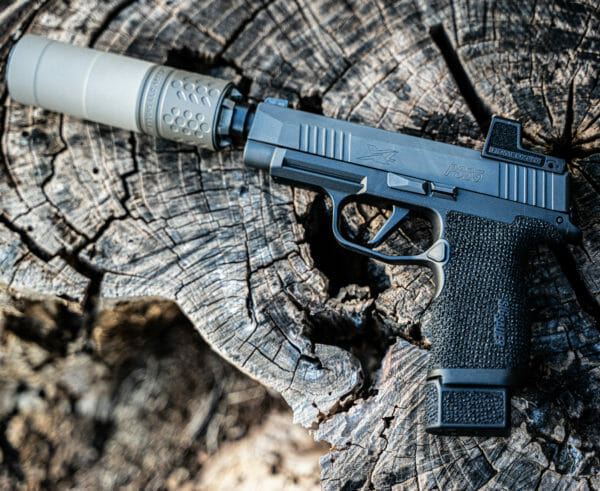 SIG P365XLIn all honesty, this has proved to be an excellent red dot sight so far, and the few minor gripes I do have are more than acceptable at the MSRP of $259. As great as the P365XL is, the Romeo Zero is just as great, and the two combined make for an unbeatable carry combination in my point of view. In my humble opinion, if you have a P365XL you need the Romeo Zero. 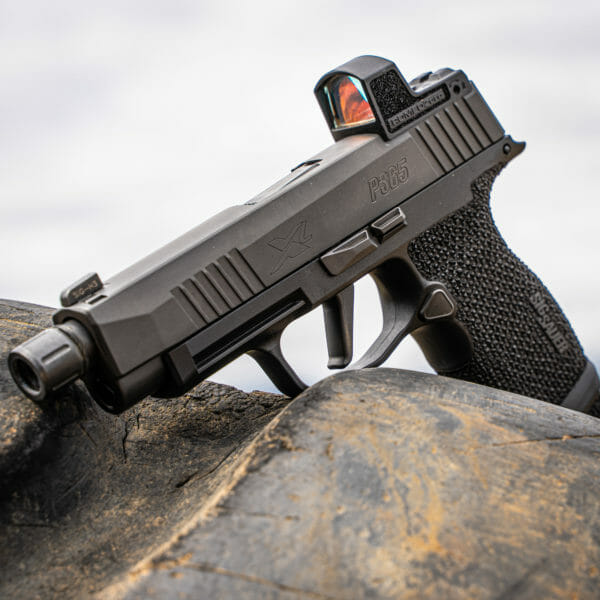 SIG P365XLIf it’s not apparent yet, I’m a huge fan of the P365XL, and I love how I have this one equipped. In my opinion, it is even better than the original. Having the ability to mount the Romeo Zero with the slightly larger pistol, makes for a pistol that is every bit as shootable as a much larger pistol that is still extremely compact for carry. I also can’t say enough, at least to this point, at about 3 months in with it, about the Romeo Zero. This sight seems to deliver everything you need at a price that won’t break the bank. Hopefully, Sig can really step up production on these, because it is kind of a big deal in my opinion. I can shoot this pistol almost as well as I can shoot a much larger competition pistol like the Sig P320X5. It gives me a confidence with this pistol that I haven’t had in any other carry gun that I have ever owned, and when it comes to a carry pistol, I’m not sure there’s a much higher compliment you can give than that. About Alabama Arsenal