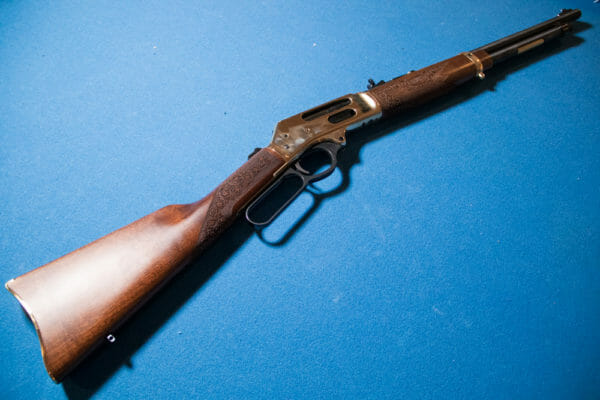 Henry Side Gate Lever Action .410 ShotgunU.S.A. –-(Ammoland.com)- When my editor contacted me to see if I wanted to review the new Henry Side Gate Lever Action .410 Shotgun, I emphatically said yes. I love lever action guns and cowboy-style revolvers. I love them so much I might have been a cowboy walking the streets of Tomb Stone in my previous life. I have a collection of lever-action rifles from Henry, Marin, Savage, Winchester, Rossi, and more. I am always looking to increase my collection when it comes to lever-action long guns. Why would I turn down the opportunity to discuss a new offering by one of the most historic firearms company in the world? Henry Side Gate Lever Action .410 Shotgun The Henry firearms have been around for a very long time. Benjamin Tyler Henry designed the Henry Repeating Rifle in 1860. He chambered his rifle in .44 Henry Rimfire and sold it for $40, which adjusted for inflation that comes out to $1,246. The rifle saw action for both sides of the Civil War. 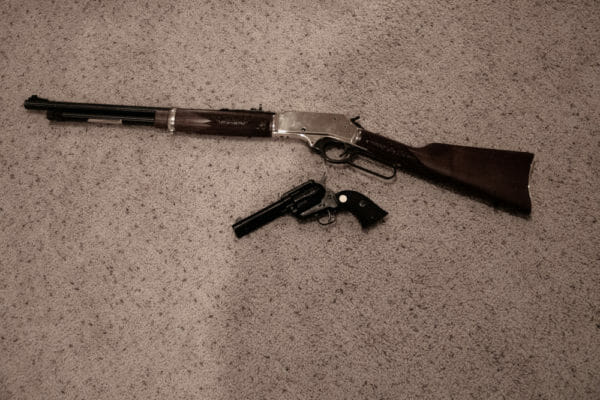 Henry Side Gate Lever Action .410 ShotgunToday Henry makes their long guns in multiple calibers. Henry chambered the shotgun sent to me in .410 bore. I was excited to get it because I don't currently own any lever-action long guns chambered in .410. I was curious to see how I would like it. When I received the Henry Side Gate Lever Action Shotgun, the first thing I noticed was the beautiful buttstock. Henry made the buttstock and the forestock out of American walnut. The carvings in the wood are exquisite. This aspect is one place Henry has always excelled in doing. Henry prominently displayed their logo carved onto the forestock of the shotgun. 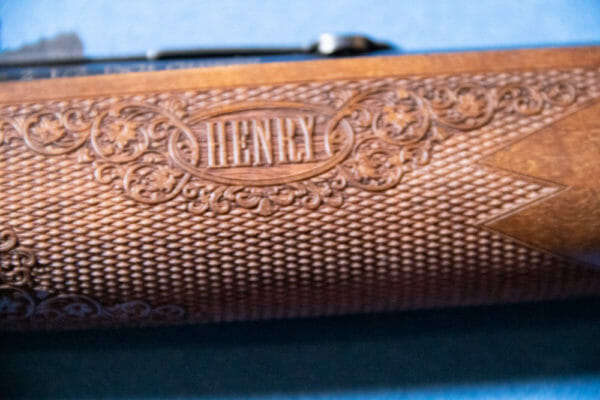 Henry Side Gate Lever Action .410 ShotgunThe receiver on the Henry is polished brass. It has a mirror finish and looks just incredible. The only drawback to the finish is that fingerprints show up at the slightest touch. I spent a lot of time wiping down the receiver to remove my greasy prints, but I can live with that. 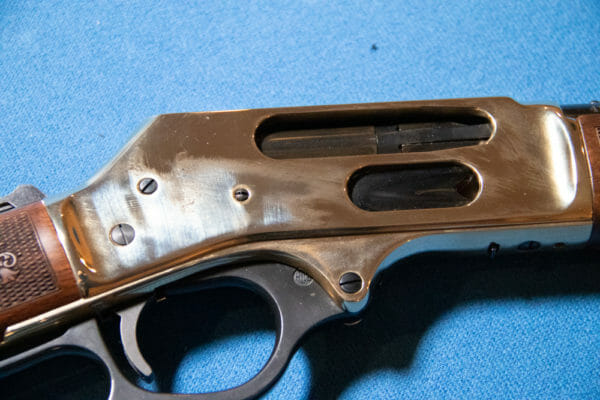 Henry Side Gate Lever Action .410 ShotgunIf the user chooses, they can add a scope to the Henry shotgun. Henry drilled and tapped the shotgun for aftermarket optics. It is compatible with size 63B Weaver scope mounts. I decided to stick with the iron sights. I do not have any plans to add a scope to the shotgun. Henry used rounded blued steel for the barrel that measures 19.8″ long. It is a traditional finish the works well for the shotgun. Like the finish on the receiver, it is impeccable without any noticeable flaws. The blued barrel compliments the brass receiver. The Henry shotgun isn't too heavy and is lighter than a lot of the shotguns on the market. It comes in at just over seven pounds. Henry distributed the weight in a way that makes the shotgun easily handled. Its overall length is 38.1 inches. I loaded the Henry up with .410 slugs. The shotgun only takes 2 1/2-inch shells so that is something to keep in mind. The shotgun only holds six shells. I wish it would hold more, but I can live with the shell count. The .410 shell is smaller than a 12-gauge shell, but it still packs plenty of punch if you are hunting small game. I liked the iron sights on the Henry. I used them to hit targets out to 100 yards. The front sight is a standard ramp with an ivory bead. I have seen this style of front sights on a lot of lever action long guns. 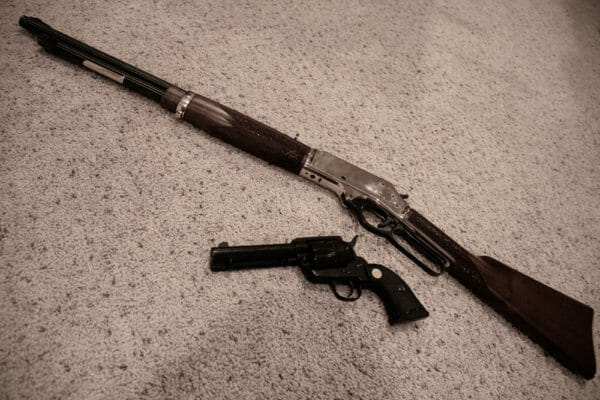 Henry Side Gate Lever Action .410 ShotgunThe rear sight is fully adjustable. It is a semi-buckhorn design with a diamond insert. The buckhorn shape gets its name because it resembles the horns on a buck. The diamond insert helps with quickly using the sights to acquire a target. I didn't have to adjust the sights at all. It seems the factory sighted it in for 50 yards. It could be that I just got lucky, but it was a pretty accurate shotgun. I was impressed. At 100 yards I had to adjust the sights to get on target, but with the ramp it was easy to do without much headache. The stock felt comfortable, planted squarely in the pocket of my shoulder. The length of the pull of the Henry is 14 inches. Henry did a pretty good job of making the shotgun as ergonomically as possible. The recoil was not an issue. There is no padding on the buttstock, but the .410 shell doesn't have the kick of a 12 gauge. In fact, a .410 has almost no recoil. I took a friend who never shot a gun before with me to the range. He was afraid of the recoil a shotgun would have, so I let him shoot the Henry. I think that him shooting it broke down a lot of his fears of the recoil. He was able to shoot a shotgun without the recoil of a 12-gauge slug. He is now in the market for a Henry. The lever action was smooth as silk on the Henry Shotgun. I was able to chamber a shell easily by working the lever. There is a significant difference between working the action on the Henry compared to my Rossi, Marlin, Winchester, and even my Henry Big Boy. It just seemed easier to use. I like the side gate on the Henry. The other Henry shotguns are tube loading. Henry still included its standard removable tube magazine on the shotgun as well. I like the fact that I can use either one. The side gate is the way I ended up loading the firearm at the most at the range, but the standard tube magazine was a great way to unload the gun and make sure it was clear. One thing I was worried about is the shells extracting. I did have another Henry in the past that had issues with the shells extracting and wasn't sure if Henry fixed the problem. A friend of mine that I ended up selling the shotgun to sent it into Henry, and they fixed it. It took about two weeks to get the shotgun back once he sent it off. After 500 shells down the barrel over the past couple of months, all extracted without a problem. It is a cylinder bore, so it shouldn’t have a problem shooting almost any type of shells. I have to mention that it doesn't have a choke, but I figure most people would know that. Henry recommends this shotgun for target shooting, hunting, and birdshot. I used it for only target shooting, but I can see how a person could use it for hunting. 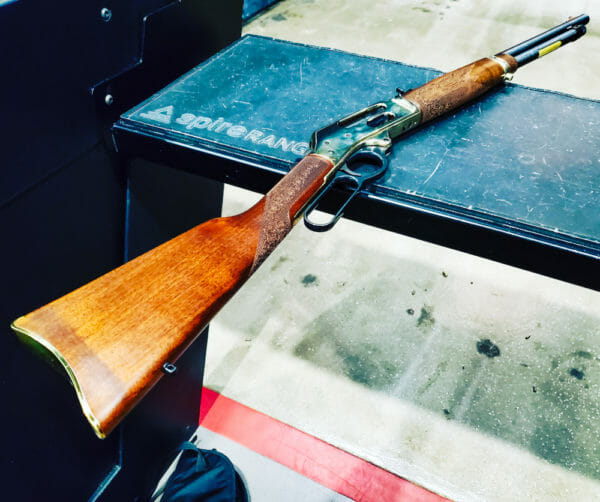 Henry Side Gate Lever Action .410 ShotgunThe Henry Side Gate Lever Action Shotgun will set you back a bit. The MSRP is $1077. The street price is closer to $850, but it's a Henry! It is worth every penny. It is more than just a shotgun to me. It is a piece of art, and a call back to the American west. The Henry Side Gate Lever Action Shotgun is just a perfect level action shotgun. I love it if you can't tell. From the brass receiver to the carvings in the wood, it is absolutely stunning. I have an extensive collection of firearms, and this happens to be my new favorite shotgun and right up there with my Hellbreaker AR15 build. If you want a .410 shotgun, then I think this is the one to get. Henry, you have stolen my heart! About John Crump